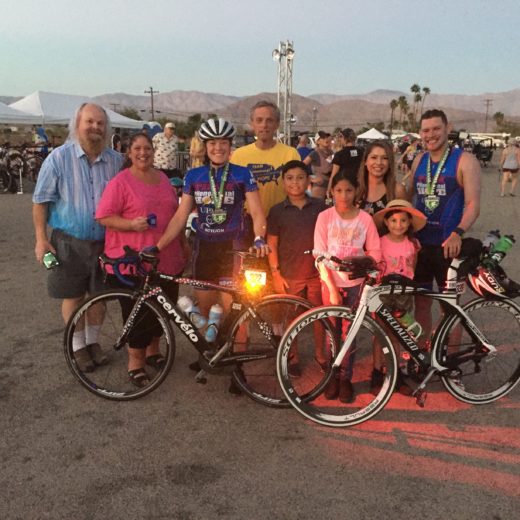 I returned to Denver and recovered from the marathon, and wondered what I’d gotten myself into. There were some doubts in my mind about completing the 12-hour time trial race in just under one month. I was more tired on the bike than I was used to, and admittedly had ramped up couch-to-endurance-athlete in a short amount of time. Would my body hold up with a 12-hour bike ride? Would my neck? Would my feet burn from hot spots? Would I stay in it mentally (the biggest challenge)? Or would this be a horrible overreach, leaving me injured or burned out after just starting back into racing? And I’d be racing in the desert with the fast people. It was intimidating.

But at home in Denver, I was riding regularly with my new friends, and on one ride I saw Irina and Greg crush this climb – leaving me in the dust – and a switch flipped, I decided then that yeah, I’d go for it. Like she went at that mountain. No looking back. And the real reason I decided to do it was because again, I wasn’t racing just for me, but for my PHriend Ornah, who lives everyday with PH. She doesn’t get to choose not to race. Her PH race happens everyday.

Ornah’s PH story began with being misdiagnosed for years. She had struggled with her weight, with medically-prescribed extreme dieting, and was going to undergo gastric bypass surgery, when she was found to be massively volume overloaded in right heart failure from pulmonary hypertension. Her liver was so swollen that they started the surgery, took a biopsy (it showed a swollen liver), and stopped, closed her up and sent her home with little explanation.

She became more short of breath over the next few weeks, to the point where she could hardly move, and her pulmonologist sent her emergently to UCLA to be admitted and cared for by Dr. Saggar. She was admitted to the Cardiac ICU and diagnosed with PAH and put on therapy and diuretics (medicine that makes one get rid of fluid), and she literally peed out 100lbs of fluid in the first month in the ICU, then another 200 pounds of fluid over the next 11 months, for a total of over 300 pounds lost in one year. I invite you to read more of Ornah’s story in her own words here:

After her diagnosis, Ornah became an advocate for herself and others who live with PH. She and her husband share her story widely, to help others learn about pulmonary hypertension. And she organizes fundraisers and is a positive force in the PH community. She lives by the motto “Carpe diem” and lives a life of adventure, working, traveling to Lake Tahoe, enjoying Disneyland back near home, and even traveling with Team PH across the West. I’m sure many know how when Ornah is on your team, you feel that burst of positivity and know you can push just a little farther.

And that’s what happened on my 12-hour race. It had started out a perfect day in the desert. Fifty degrees, no wind, flat course. And my lap times were better than I’d expected. I felt great. My first 100 miles done in well under 6 hours. But then my right knee started hurting (I had been sloppy about my TT bike adjustment), and the day was warming up and the headwind also kicked in. I was draining 2 bottles an hour with every 18-mile loop. It was getting more challenging, and two things got me through. One was my dad as crew chief. I’d send him a verbal text from the back half of the course via my Apple Watch, have whatever I needed ready (water, UCan, Coca-cola, etc). The Coke on ice was pretty much the best thing I’d ever had. And then I also sent Ornah a verbal text message, telling her I was hurting but thinking of her helped me keep going. And she texted back a quick message to my Apple Watch, and it made all the difference in the world.

When I finished, I saw my dad, Ornah and Jonathan, and my teammates, and realized again how in the solo races you’re never racing alone. And I also realized how it was truly a privilege to race as a Let Me Be Your Lungs athlete with Ornah and with Benita the month before, and how much each of them motivated me to just keep going. In training and on race day.

So this is what Team PH is about: athletes pushing themselves for others, and patients who motivate us to keep going. We are a team, and we continue to race together in this PH race. I am proud to be a part of something special.