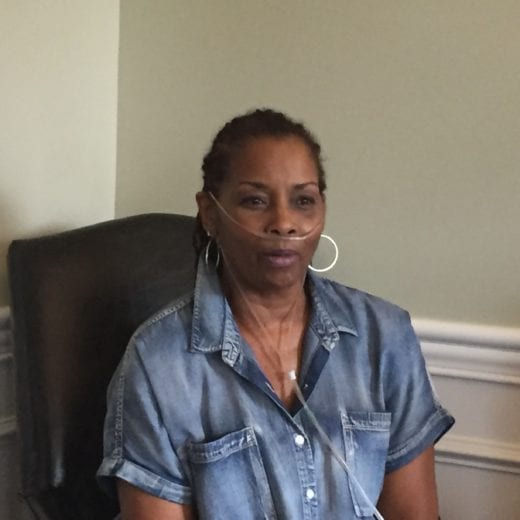 Hi. I’m Vicky and my story probably started ten or more years before I was finally diagnosed with the first disease that would forever change my life, which is severe COPD. Thank God for a vitals check at Urgent Care, where a pulse ox reading revealed an extremely low oxygen level which was somewhere down in the 60’s. I was immediately hospitalized for several days, then at discharge given a list of prescriptions, one being 6 liters of oxygen that I was told I needed to use 24 hours of a day and 7 days a week, for the rest of my life. And as they say the rest is history! I wish I could express how I  processed all that, especially since  I had only gone to Urgent Care for what I thought was just a swollen right foot. And even though I hadn’t ever experienced anything of mine swelled, frankly I welcomed a visual reason to call off! My body seemed to be extremely tired those last couple of days, and like the swollen foot I thought it probably was from all the unusual walking I had done a couple of days prior. Yet, I knew I still needed to make it to work. The visual part must sound odd, but what I meant is I had been testing for at least a decade for the reason that my health was steadily declining yet, the results would come back saying no real problems. So much so, that my PCP at that time started to give me skeptical looks as my lists of symptoms grew with each visit. Almost as if I were making things up! The list included severe headaches, daily body aches feeling like the flu to the tenth power, any size of a staircase felt like I was climbing mountains, just trying to walk five to ten feet was monumental, even once my heart was pounding so hard that I could see my chest’s  rapid movement through both my turtle neck shirt that was under a winter sweater. Which I knew truly wasn’t normal! Oh and going to my job that I adored became a hardship, because anything other than sitting took entirely to much effort. I praised God for my boss and more so for her friendship, that she knew my work ethic and my character. She knew something drastic was wrong for me to call off, or have to go home as many times as I did, and so often she made many concessions for me to keep my job and my sanity. Thank you Alisia.

Even while still trying to process all this what stood out most to me was, I was feeling truly blessed that I hadn’t heard the big “C,” and/or been given a death time line, although sometimes I thought it might be easier than trying to get through some days.

Enter my next bomb! During the follow up visit I was told the medications weren’t really making a change and I should probably evaluate for a double lung transplant in about a year. All I could do was exclaim Jesus!  That process is a week long series of tests and appointments that you need family and or friends to assist you to get through physically, as well as mentally. And for all my support team, I’m eternally grateful. Especially the mental part, because at this point I was feeling completely powerless, and really unable to retain all that was coming at me.

After the heart catherization procedure, one more bomb was about to be dropped. I was then told I had a duel diagnoses, of COPD and Pulmonary Hypertension, both at this time are noted to be debilitating and incurable diseases.

Really at this point I actually only seen the doctor’s mouth moving, I had mentally shut down, I couldn’t receive anymore, yet I looked at one of my best friends face and knew it wasn’t good. The last thing I heard was we will check again in 6 months. I drew on my faith again as usual. It was recommended to continue pulmonary rehab, which is basically cardio exercising at least two days a week.

I will say oxygen and pulmonary rehabilitation has given me back some resemblance of my life, and has allowed me to do most of the things I’m use to and like doing. Maybe a lot slower and with a lot more planning, but do-able.

By the grace of God I’ve gone from being house bound, not having enough strength to walk across a street without pausing, and not able to lift my oxygen tank to put in my car. To lifting them now with one hand, throwing two or three in the car,  and going to my favorite place, which is Keystone State’s manmade lake!

Pulmonary Hypertension: High blood pressure in the arteries that go from the heart to the lungs. Lung arteries become narrowed or blocked making blood flow harder and raises the blood pressure in the lungs. Heart muscles get weak and can eventually lead to failure. Because of this the body easily retains fluid. Some days I feel and look as though I’m 8 months pregnant, to which I take a diuretic and have to be highly vigilant to my sodium intake. I’ve gained a considerable amount of weight, and feel very uncomfortable in my body. Yet compared to what some people with this same disease are going through, to even mention the above, makes me feel like I’m whining! So again  I know I’m truly blessed. Along with as soon as I started the oxygen , the headaches and body aches left, without added medications my heart doesn’t rapidly pound and  almost two years ago now I was told I’m not sick enough for a transplant at that time, and I would be removed from the list.

Most people are truly surprised of how much ability I do have and to that I’m again eternally grateful to God and my UPMC’s team of extraordinary doctors and all the rehab clinicians. Thank you.

And yes I’ve had some set backs with bronchitis, and I’m currently getting over pneumonia. I had to leave my home because it was to much to maintain, plus I surely ask for more help than I thought I would have to do at the age of 63. But basically I’ve had to make a lot of new normals, which included retiring from a caregiver management position for a mental health agency. Yet, I love telling people how those who allowed me to help care for them, are now helping to care for “Miss Vicky!”

I leave you with the thought that you must listen to your body’s needs, press that doctor or get a new one, don’t give up and don’t give in. Because with Team Phenomenal Hope’s outstanding efforts I’m confident that in time breakthroughs will come!

So where most stories finish with ” The End “, mine will just ” Pause” for now. Because with God, my family, friends, and Team Phenomenal Hope, I will run on and finish my race victoriously. See you at the lake!!!!!!!