Welcome to the 2015 Race Across the West! 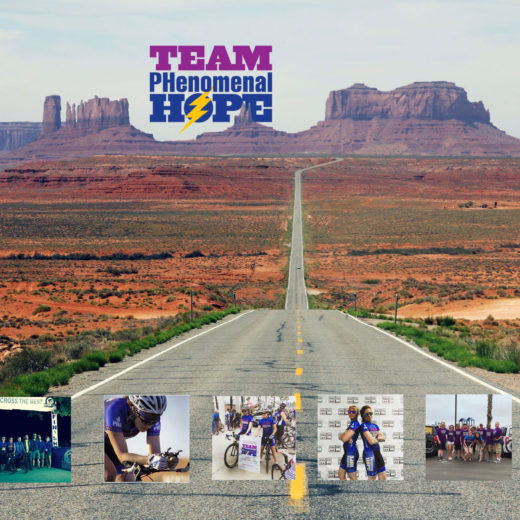 We could never have finished without the help of the PH community and everything they do, from cheering us on at the kick off event in Oceanside to sending us encouragement and support in social media. Our continuing goal is to race alongside you as we fight to cure and raise awareness of pulmonary hypertension.

In June 2015 we returned to Oceanside, CA for a team effort in ultra-endurance cycling. We competed in the 2-woman team event of Race Across the West, with 2 racers and 8 crew members.

Patients, patience in Race Across the West

In 2015 the team, led by Crew Chief Peter Kochupura, consisted of returning racers Anne-Marie Alderson and Patricia George. On crew we had Ryann Biedlingmeier, Bryan Blacka, Chuck Finder, Greg Flood, Scott Morrison, Evan Robinson, and Carolyn Whelen. Together we are all racing with the PH community.

The Race Across the West is an 850-mile bike race held in conjunction with the Race Across America (RAAM), beginning in Oceanside, California and finishing in Durango, Colorado. It passed through 17 time stations (see below) through the desert, monument valley, and climbing up into Durango, Colorado. Teams must complete the race within 68 hours. We finished in 61!

This is a non-stop, all-out, race against the clock. Our team had a rider on the road pressing ahead at all times. The racers traded back and forth in time intervals all across the country, one rider on the road with the other in their crew vehicle heading up ahead to an exchange point. It went on like this for two days with some longer individual ride times at night to allow one rider to rest while the other covers more miles when it is cooler outside. The crux of this race is on the crew: Getting the racers ready for their next interval, helping with recovery in between, making sure we stay on course, pushing forward to get to the finish line.

This is a non-stop, all-out, race against the clock.

Our team has its roots in RAAM, and in 2014 we realized the potential of using team and high profile ultra-endurance events as a lightning rod of awareness. It is our goal through continuing to race in RAAM and RAAM-related events like RAW, that we continue to use this race not only as a platform to inform people about PH, but also motivate and inspire others along the way.

Team PHenomenal Hope takes on the RACE ACROSS THE WEST!

Come join Team PHenomenal Hope at Oceanside on the day before our race! We would love to meet you!

This year we are racing as a 2-woman team with an 8-person crew, and we look forward to racing with YOU from Oceanside to Durango.

Celebrate with us at a casual get-together in Oceanside! Space is limited so please RSVP.

Join us as we once again pedal westward, racing to make a difference in the lives of those with pulmonary hypertension.

Schedule of Events for Team PH in Oceanside

We want to bring you a bit behind the scenes with a series of blog posts.

Here are featured blog posts and interviews both by those on our team as well as our sponsors, who continue to play a huge role in getting us to the starting and finish line. You’ll hear from Coach Jim about training philosophy, Anne-Marie Alderson about nutrition, Chief Pete about crew perspectives, learn about our bikes and gear, learn from Radio 360 about the vital aspect of team communications, and more!

There is so much involved in planning and executing. Below are a series of blog posts to bring you onto the bike as well as into the crew van, and share this adventure with you.

Intro to Race Across the West

The Tao of Crew

Coach’s Blog: Training for the Race Across the West with Jim Bruskewitz

About our communications equipment and Radio 360

This effort is possible in part due to generous funding from our sponsors. Would you like to make a personal donation to aid our efforts to raise awareness of pulmonary hypertension?

Track the race live with ridefarther.com

While we gear up for the Race Across the West, our teammate Pascale Lercangee will be representing Team PHenomenal Hope in the National 24 Hour Challenge in Michigan! Make sure you follow us as our ultracyclists put Team PH on the map in the West and Midwest this month.