What #LetMeBeYourLungs Means To Us: The Clasby Family 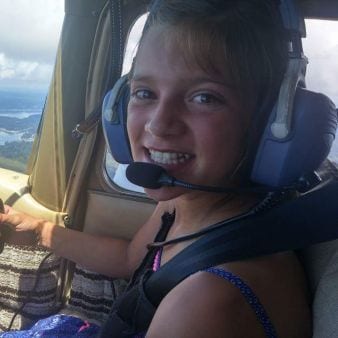 Our 10 year old daughter, Brooklyn, was diagnosed with Idiopathic Pulmonary Hypertension when she was 3 years old. After complaining of “her heart hurting” we took her to the doctor, where an ECHO revealed severe Pulmonary Hypertension. She was started on IV medications, along with multiple other medications. After a year, with little improvements to her PH, her doctor recommended that we relocate to sea level. Our family moved from Southern Colorado to north of Seattle, Washington in 2012.

Two years after our move, Brooklyn’s PH began to progress at a rapid rate. Her Seattle doctor recommended that it was time to be evaluated for a transplant. We were told we would have to go to another state for transplant because Seattle Children’s does not have a lung transplant program. During the time of getting transplant approval, we encountered major issues trying to get evaluated due to insurance rejections for transport from Seattle to California when the call came. It was at this point in our PH journey that we met Carl Hicks.

Carl had met Brooklyn’s grandparents while attending a PH fundraiser in Colorado. Carl was made aware of our barriers to getting a transplant, and called us to offer support and wanted to help in any way he could. He personally called multiple airline companies and pilots to see if he could help work out the problem. It was amazing from a man that had never actually met us.

After much effort it was decided that a resolution would not be made in the time needed. We opted for a rarely used, more experimental, surgery instead of transplant. On Sept 11, 2014, Brooklyn had a Potts Shunt surgery. This surgery has improved her heart function and quality of life. A year after the surgery, Brooklyn was been able to be weaned off her IV medications and has been able to participate in some sports.

Since that time Carl has become an important part of our PHamily. He has given us so many special memories from letting Brooklyn fly his plane, attending Bluegrass At The Fair in Colorado, and many PH events together. Carl is now going to give Brooklyn the experience of a triathlon through Let Me Be Your Lungs. Let Me Be Your Lungs is such a special program, and one that we are so happy to be a part of. Carl has endured his own set of complications preparing for this race, and we can’t wait to be there to cheer him on, and let him know how much of an inspiration he is to us too.

The Let Me Be Your Lungs program gives Brooklyn the opportunity to participate in a highly athletic event, one that she would not physically be able to do. Our family appreciates the efforts made to continue to raise awareness and funds for further research in Pulmonary Hypertension. We have dreams and hopes for Brooklyn’s future and we look forward to seeing those dreams come to life as there continues to be strides in the fight for a cure. We will always have PHenomenal Hope!