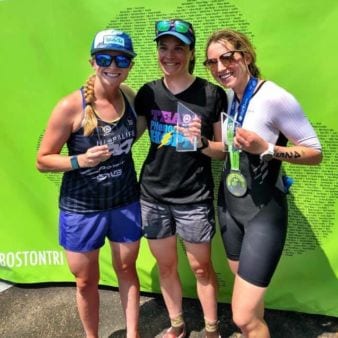 Boston Triathlon! The only triathlon in Boston, and for a reason. I was hesitant to sign up for this race just because of the bike course. I did this race a long time ago, but only a sprint. This was Olympic distance which meant .9 mile swim, 21 mile bike, and a 6.2 mile run. The bike course was FOUR loops in south Boston with three 180 degree turns EACH lap. I only imagined chaos and it was close to that. They spaced out the waves ten minutes apart to try to keep things less crowded, but that also meant standing on the beach for what felt like forever (it was like an hour and 15 minutes because we were a later wave). I guess being elite has it’s advantages being in the first wave. The one really great thing was that this race took me 15 minutes to drive to at 5AM!

Swim 24:16: The swim felt pretty good, nothing really crazy to report on. There was one girl in front of me in my wave which was helpful because I used her to sight. Our bright pink caps came in handy!

Bike 59:25: First of all, I failed to look and see that this bike course was a little less than the typical 40K course. At one point I thought I skipped part of the course (it was so many loops, I got a little dizzy). I panicked a little thinking, “I wonder if they KNOW????” Then I realized I hadn’t skipped anything and I just needed to survive six more 180 turns with lots of other athletes. I got done and was just happy to have survived without crashing into someone who slammed on their brakes.

Run 46:52: By now the sun was out in full force. This course was two laps, which was kind of fun because there were lots of spectators cheering. I felt good starting out but slowly faded as I think the sun and lack of fueling (I hadn’t done an Olympic tri in many years). I was almost done but felt like I needed to throw up, so I stopped a sort of did. I walked a little then started running again for the finish. My legs felt like I was dragging them to the end. OUCH. I was so glad to be done and I rehydrated/refueled when I was done.

I ended up 1/30 in my age group and 6/170 over all (behind five elites who went off in that first wave!). I was pretty happy with the results, but man, that was a tough race. Onward and upward!