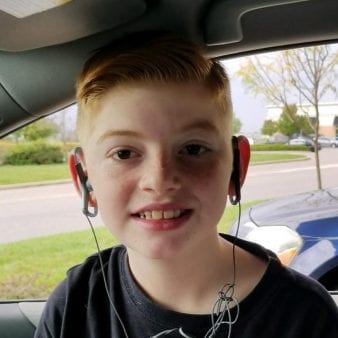 My son Cash Warrior’s story is a unique one to say the least.

He has been a fighter his whole life. We were living in northwest Indiana in December of 2006. Cash was seven months old and had a cold. We took him to the doctor and they gave him an antibiotic. The next day my wife Abbe noticed his face was droopy on right side and he wasn’t moving his right arm. Abbe called me at work and explained Cash looked as though he had a stroke. I said, “No way,” but take him back to the pediatrician.

The pediatrician said go directly to ER immediately. We took Cash to a community hospital and they examined him and took an MRI of his brain. The ER doctor told us Cash indeed had a stroke, and sent us directly to University of Chicago Comers Children’s Hospital.

Cash was in Comers for two weeks and spent his first Christmas in the hospital. The doctors finally determined Cash had MoyaMoya Syndrome, an extremely rare condition where all of his blood vessels in his brain were closing off. He would need surgery very soon, or he would not survive. In January of 2007, Cash had his temporal arteries sutured on both sides of his brain to revascularize his brain. Two neurosurgeons spent more than eight hours operating. Cash recovered, but now has a right side hemiplegia, and cannot move his right hand much. He has worked so hard to overcome his disabilities that have come with this.

Additionally, the doctors had been monitoring a narrowing in his descending aorta over time. Our cardiologist at Riley Children’s Hospital in Indianapolis noticed his blood pressure was really high, but could not find any reason for it. We were then referred to a nephrologist to see if there was a renal explanation for his high blood pressure. The nephrologist found cysts in both kidneys, but no reason for his high blood pressure. She ordered an ECHO, and found pulmonary hypertension with his right ventricle flattened.

Cash has been treated for PH for a number of years now at Cincinnati Children’s Hospital. We have watched his slow decline over time. His fatigue level has risen and his medication burdon has increased. His heart pressures have stabilized, but his symptoms have increased. A High Res CT Scan was ordered, and the results show an unknown lung condition.

From there, Cash was referred to a rare lung disease pulmonologist. He has never seen anything like Cash’s lungs before and has no idea what it could be. He knows it is progressing, but does not know how to stop it. Cash has just been put on 24 hour oxygen, which is new and unknown to us. He is going to be getting some genetics testing done to help find answers. Abbe and I are scared, angry, and worried about what Cash’s future looks like.

Cash’s story is a lot to take in, and is very emotional to tell. It can be very isolating and stressful for parents of a child with two extremely rare diseases, but we are honored to have Team PHenomenal Hope share Cash’s story, and more importantly, raise awareness for this disease.