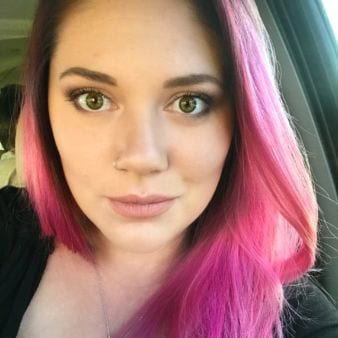 Back in late November of 2019, I began feeling sick. Almost like I had a cold. I’m a school bus driver, so I figured I just picked something up from one of my students and kept trucking. In December, I walked up the same flight of stairs I had been walking for more than a year, and had to stop to breathe once I got to the top. It was the only big thing I noticed for several weeks.

The day after Christmas, early in the morning, I went to the emergency room for what I believed was a kidney infection and a possible upper respiratory infection. I explained my symptoms: shortness of breath, wheezing, headaches, back pain, frequent urination, burning urinating, and a cough that was sometimes productive. The doctor ordered for a urine sample and an X-ray of my lungs. She came back, let me know that I did have a kidney infection and that I also had pneumonia!

In January people at work began noticing my shortness of breath. They began to see that I was only able to walk very short distances without having to stop to breathe. My boss and coworkers would check in with me, or tell me that they thought I should be seen by a doctor again. I brushed them off, assuming that I was just taking longer to heal from the pneumonia because I had two infections to fight off.

Eventually I couldn’t load my dishwasher. I couldn’t walk to my car. I couldn’t walk to my bus. After five steps I would have to stop to breathe. I would feel like I was going to pass out, and as though my heart was crammed in a small box that it didn’t fit inside of anymore. I no longer attempted full flights of stairs, because I could barely walk up the stairs in my bus. I was monitoring my heart rate with my Apple Watch, noticing that taking a box from a shelf above my head would make my heart race at 150/160 bpm.

One day I got off of work and noticed my left leg and ankle had swollen so much that I wasn’t sure I could take my shoe off. I went to the ER again, I told them of my previous visit not even a month prior. I had some minor tests done, and was released with prescription Tylenol, “for aches and pains.” I just had a mild case of bronchitis. I left that visit feeling like I was being irrational. That I was playing up my symptoms, and that I wasn’t as sick as I was acting. So I went back to work the next day.

A few days later I found myself at Urgent Care, where they still couldn’t find anything wrong with me. I cried to the nurse that as long as I was sitting in a bed they wouldn’t see my symptoms. Someone in that Urgent Care saved my life. The doctor there had me directly admitted to the cardiology wing at the hospital I had already been to several times, even though he couldn’t physically see anything wrong with me and my tests were all normal.

It was the next morning at the hospital, I was scheduled for a stress test and an echocardiogram. The echo technician came first, and while she was imaging my heart, the nurse practitioner came in for my stress test. The way they looked at one another, it was clear she had found something very wrong. My care team decided against the stress test, and tentatively diagnosed me with pulmonary hypertension. After ventilation–perfusion (VQ) scan, they decided on chronic thromboembolic pulmonary hypertension (CTEPH).

I was released with a right heart catheterization to be performed by a PH specialist the next morning. What he found during my RHC was so severe that I was then admitted to National Jewish, a hospital that has a team dedicated to PH. I needed to begin IV therapy immediately. For three and a half weeks I learned about PH. In that time I learned that I do not have blood clots or CTEPH. I have primary pulmonary arterial hypertension.

Now home, I’m unsure when I’ll be able to return to work due to schools being closed due to the coronavirus pandemic. I haven’t been able to obtain masks to use while mixing my medication, because they can’t be found anywhere and my specialty pharmacy is even out of them.

I’m home with my kids again though, and I can walk again. I can breathe. I don’t feel like I’m going to pass out anymore. I’m no longer in heart failure! I’ve decided that a little continuous IV therapy isn’t going to stop me from living my life, because it’s already helped me to get my life back!