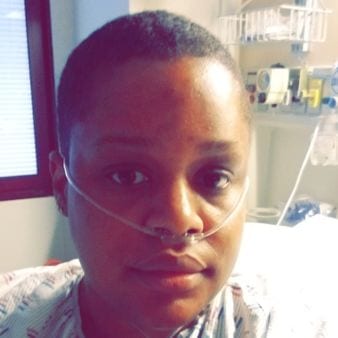 My name is Tamara, I’m 33 years old. On Christmas Eve of 2016, I attempted to walk my dog, but could not get very far. I was only able to walk about five parking spots before I had to turn around and try to go back to my apartment. I was not able to make it up the stairs, so I sat in my car, huffing and puffing for an hour trying to catch my breath. I had never dealt with a medical emergency, and looking back I should have called 911.

I eventually got back into my apartment and went to bed. Some might cringe at that fact, but I’ll be honest so others can learn from my mistake. I woke up the next day feeling OK. I took it easy, but I still felt off. It was Christmas day and all of my family lives out of state, so I stayed in bed all day resting. Our office was closed that Monday and I went back to work on Tuesday. That’s when I knew something was wrong.

I could not breathe walking around the office at work. I called my primary care doctor and they were concerned so they squeezed me in that day even though no appointments were available. They did blood work and a chest x-ray. Everything came back normal, but two tests had to be sent out. I was told they would most likely be normal too, but if not I would hear from them that night.

I got a call about 8 p.m. that night that my d-dimer blood test came back high and I needed to go to the emergency room. He said I probably had a blood clot and they needed to rule that out. When I arrived at the ER, they did a CT scan and it showed I had extensive sub-massive clots in my lungs. Some looked like they had been there for awhile and others looked fresh. I was admitted and started on a blood thinner called warfarin. A month later, I was still not doing well, so I had another CT scan and it showed that my clots were unchanged. I was referred to a pulmonologist who referred me to get an echocardiogram. He was concerned that because some of my clots looked old and were not going away, I had a condition called Chronic Thromboembolic Pulmonary Hypertension (CTEPH) and it could be putting strain on my heart.

I will never forget that day. It was February 22, 2017, and I was scheduled for a routine echo. I had a nice conversation with the technician during the exam. After the exam, I had to wait for the cardiologist to review the images to make sure they got everything they needed. I was sitting there for a while when I saw a man walking toward me. He asked if I was Tamara, then explained they found a blood clot in my heart and asked if I wanted to see the video. The video showed this jello thing just dancing, flopping back and forth in my heart.

I was admitted to the hospital again. My blood thinner was switched from warfarin to lovenox because they were not sure if I failed warfarin. This was a major turning point in my care. My cardiologist used a blood test, not my weight, to determine how much lovenox to prescribe. Lovenox is a weight-based drug. Meaning, I should have been prescribed a milligram for every kilogram I weighed. I did not know this at the time. So, I went months taking about half of how much I technically should have been injecting.

I continued to get worse for months and the hospital I was going to proposed doing a major surgery called Pulmonary Thromboendarterectomy (PTE), but they did not have a lot of experience doing it. I sought out a second opinion at another hospital with a doctor who had been doing this surgery for more than 20 years. He referred me to their pulmonary hypertension team and to get another echo. I got another echo a week later and the clot was still there in my right atrium, but three days later I had major trouble breathing. Because I was seeking a second opinion at the new hospital, I went to their emergency room. I “walked” into their emergency room with 70% oxygen.

The clot had broken out of my heart into my lungs. I was admitted for almost two weeks. This hospital caught the medication mistake too! I wish I could say it has been smooth sailing since, but it hasn’t. I’ve been on and off oxygen. I failed lovenox and I failed xarelto, and I’m back on warfarin now. They found a blood clot in my inferior vena cava earlier this year, and in October they found ANOTHER blood clot in my right atrium. A procedure was attempted to remove the clot in my heart and IVC that did not go well, and I’m currently in recovery for that. I’m now being referred to the University of San Diego with the hopes of getting the PTE surgery there because I am considered too high risk by the surgeons at my current hospital.

It’s so important to be treated at a facility and by a doctor who is well versed in PH. Ask questions! Do your research! I was so lucky to have sought out a second opinion and found my doctors. I would not be here today otherwise.

Tamara is a recipient of the Team PHenomenal Hope Unmet Needs Patient Impact Fund. Learn more about how this fund supports PH patients at teamph.org/unmetneeds.