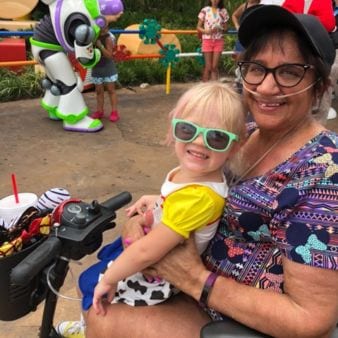 My journey with pulmonary hypertension (PH) began more than eight years ago. I remember when the doctor told me I had PH. At that moment, all I could think of was how relieved I was that there was a name for and a reason for the way I was feeling.

It was a long road. It wasn’t easy, and I had many dark moments. I didn’t think I’d ever feel better or be able to feel “normal.” I had to quit my job as a preschool teacher. I had to give up so much, I became depressed and somewhat hopeless. Then my doctor told me he had a patient who wanted to sponsor someone to go to the Pulmonary Hypertension Association Conference, which was in California that year. This gave me something to look forward to. I was determined to get there.

At this point, I was unable to fly, and my oxygen needs were high at 20 liters, so we drove from Florida to California. I passed out once in a Barnes and Noble and scared the daylights out of my husband, but I attended that conference.

It was a game changer for me. I saw people doing well with this disease, and I began to have hope. When we got home, I went to see my doctor and, to this day, he still tells me he can’t believe I made it to that conference. At that visit, I had heart failure and was admitted to the hospital and put on Veletri. From there, some things got better, but then I had to battle the side effects. I spent much of that first year in bed.

Once I started feeling better, I wanted to help others. I became a support-group leader and attended four more conferences. Now I’m a patient-to-patient support-line mentor. I volunteer in my daughter’s classroom once a week. I also watch my two beautiful grandchildren twice a week. I’m able to go and do as I please within reason.