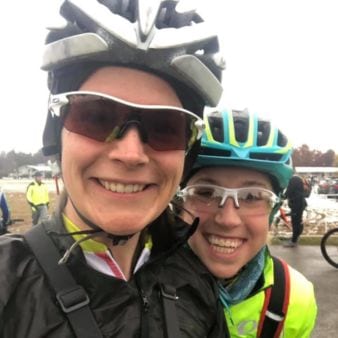 Iceman! I was a little nervous (sort of, not really?) for this race, mostly just because I have little to no experience mountain biking. The last time I had been on a mountain bike was a year before out in Colorado (with Patty George). I felt confident I could finish based on my fitness on a bike and that I heard it was a “fast” course for mountain biking. The most amazing part of doing this race was having Camille Frede, my former Let Me Be Your Lungs partner, not watching from the sidelines, but RACING with us. She’s incredibly inspiring and watching her roll up to the start line was so much fun.

I flew into Michigan a little early to visit some family then drove up toward Traverse City. The weather was gross, rainy, cold, and not ideal. The Frede family rented this huge house along a lake for everyone to stay together. The evening before the race we went to pick up our packets, did a little shopping, and had a great dinner. So, this race had nearly 5,000 participants. That meant lots of waves of people. If you had never done the race before you were placed randomly in a wave toward the back. Each wave had around 100 people in them to attempt to spread things out. My teammates Aaron, Camille, and Camille’s parents were in waves ahead of me, so I cheered them on while waiting for my turn. It was definitely cold outside, but I had accumulated good cold gear in my years of Boston bike commuting so I wasn’t too worried about the weather.

The beginning of the course was flowy, sort of fast, but sort of muddy. I didn’t go full gas, or anything just concentrated on being smooth. My goal was to finish and not fall. There was a lot of double-track, but also some single-track parts. The single track wasn’t too congested yet, but we all just followed each other. There were plenty of parts to pass others without making a scene. I passed Camille and cheered for her at one point. She was riding with her family and insisted that I not wait for her. I didn’t want to listen, but I carried on.

At around ten miles I believe the mud got thicker and there was just more of it. People were off walking a lot, but I rode as much as I could and channeled my former cyclocross skills to get by. Challenging, but doable still. I thought, “Hey, this is kind of fun.” Then, chaos hit.

The mud was so bad that it backed up everyone once the course changed to single-track. It was like waiting in line for a really popular rollercoaster only you had no idea when it would get moving. Eventually things opened up a little, but the mud was so deep that running was actually easier at times than riding. I did a lot of running before this race with my dog. Turns out it came in handy. I rode when I could, then ran when things got tighter.

The last ten miles or so were way less muddy and had some hills in it. Now we are talking! My legs were fried at this point from the extra mud pedaling. Also, my rental bike seat kept sliding down. I had to stop many times to put it back up because my knees didn’t appreciate it. There were lots of people on the course cheering and keeping you going until the end.

I was so happy to be done, finished, and didn’t fall over not once. Apparently, all the times were slow this year, so my sort of goal time was nowhere near when I finished. Aaron came in shortly after me, while Camille and her family bailed half way through just because of the heavy traffic. I am still so proud of her! We will be back at it for 2020 for sure. Maybe less standing in line and more pedaling? 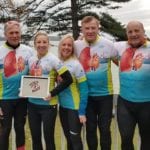