Knew nothing, new everything. Going Ultra at the ‘Squatch. 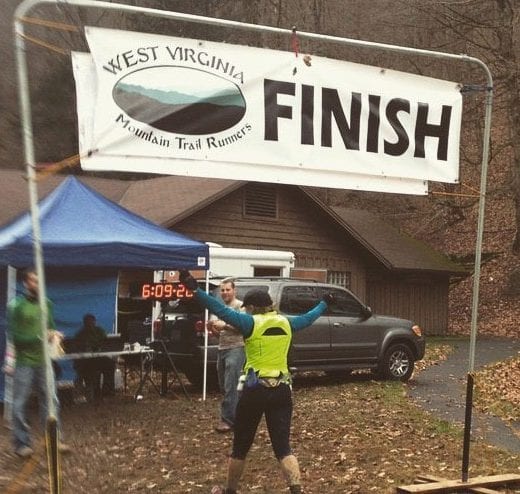 I am clearly interested in living life a little more dangerously.

After a successful trans-‘Merica bike race with Team PHenomenal Hope, I felt like I needed to get a few other things off the bucket list. My sister, Danielle, had started running in early 2014 so my dad signed the three of us up for a local half marathon on a rail-trail by my parent’s house – the Buffalo Creek Half Marathon. Danielle proved her tenacity that day, having only run a maximum of 8 miles… back in April of that year… and then completing the 13.1 miles without a single walked step. She nearly collapsed at the finish line, her face as white as a ghost, exclaiming “I am not a runner!” although she most clearly was. I had already signed the two of us up for the May 2015 Pittsburgh Marathon, a send-off to her 20’s (which will officially be over just about the time she’s able to descend steps once again, should she accept the marathon challenge).

Since I did a handful of runs in the fall, I thought maybe I should stick with this “running thing” for a little bit. After all, all of my bike tires were flat.

Patty, the Team PHenomenal Hope mastermind, suggested we do the Frozen Sasquatch trail race in Charleston, WV as a 2015 opener. The options were 25K (15.5 miles) and 50K (31 miles). I had never done a trail race before, but I knew I had just completed a half-marathon… and in my infinite wisdom, knew that I could complete a 25K. So what’s the fun in that – knowing you could actually finish a race for sure? Before putting the final nail in the coffin and registering for my first trail race/ultra marathon, I challenged myself to a trail run at our local North Park, promising (condemning) myself that if I could complete 8 miles, then I would sign up for the 50K. And so it was my fate.

I guess with all of this year’s global warming, the Frozen Sasquatch wasn’t meant to be too frozen. The forecast was calling for 40F and rain. I honestly think I spent more time debating what apparel to wear than I did actually training for the race. Two days before we packed the CR-V for Charleston, I hit up a local running shop and bought a new Mizuno top (heat generating when wet… it’s kind of magical) and a new waterproof vest and a waterproof cap. I gave them one test run of 5 miles. I think I still violated the “no new stuff” law there. I ended up packing my “tried and true” thermal tights with the thought of freezing rain in my mind. But, after 2 minutes of conversation with Patty in the hotel room I was freaking out about the thermals being too hot and we rushed out to Dicks Sporting Goods. I bought a pair of NIKE Pro capri pants. Never had a pair of those before. 100% new. I feared for my nether-regions, but the thermals were equally as risky and the “Pro” part of the name gave me some (non-validated) confidence in quality.
The rain came as promised, but not in the intensity or with the chill that makes you second-guess your decision to commit to half a day of exposure. In fact, the rain was off and on and the only real impact it had on the race was… peanut butter mud. And that peanut butter mud was bad enough on the flat sections, but was nearly fatal on the downhills and reduced me to bear-crawling up some of the steeper hillsides. Speaking of hills…

Why those hills weren’t the MAIN topic of the prior years’ race reports I read, I will never know!!! Maybe it’s because I’m from Pittsburgh and not used to the mile+ long hike-a-bike type climbs?? GOOD GOD, ALMIGHTY! If I had two cells in my brain I would have paid closer attention to the elevation map on the race website and known that I should have added Zone 5 hiking in my race prep. Luckily for me, I had several people with actual experience tell me to hike the climbs. And it’s not that I needed someone to tell me that I couldn’t run those climbs, that was crystal clear to me, but that it was okay to walk them. Guilt ain’t my thang.

Although my main goal was to finish the race (with all of my teeth still intact), I also had a goal to finish inside 7 hours. I didn’t know anything about the course except for what details were gleaned from an elevation chart and race reports, and I didn’t know if my 7-hour goal was laughable or pitiful. I was tasked with two 25-K loops, so I guess I had the advantage of course knowledge on the 2nd lap (although that gave me more anxiety than relief). There were three huge climbs (clear from the elevation chart) but their steepness and soul-squashingness was only revealed during the race. It’s one thing to hike a cliff on fresh legs, and another thing to do it 20 miles into a race that you aren’t even well trained for in the first place. I wish a Sasquatch had popped out of the woods and chased me up a few hills to get me moving beyond a crawl. Or eaten me and put me out of my misery.

Around the 7 mile marker I caught up to a gal that I remembered seeing at the starting line. Her name was Em and she looked like a Mighty Mouse. We started up Hike 3 together and she told me in her Aussie accent that she has just done a 50K in Hong Kong (?!) and, when I inquired, she told me she had 10-12 ultra marathons under her belt. She cheered me on as we ran together and chatted, but she was too strong for me and I cut her loose (i.e. she ran easily out of my sights) before the final aid station. I got passed by one other lady around the same time that Em lost me, and I had seen one other lady ahead of us on a switch-back. I wasn’t sure if she was 50 or 25K-bound, but she looked like she was having a good time and was cruising along no problem-o. That put me in 3rd or 4th place, at best.

When I came through the half-way point, which was also the start/finish area, my mom was cheering and ready with my drop bag. I swapped hats and filled up my Nathan’s belt (on it’s second run on my hips) with some more water and UCAN, then I was off again. I was solo for most of that last lap, so I turned on some tunes. A trusty playlist that had gotten me through many dark times in bike races.

The start of my second lap was borderline pitiful, so I laughed when the Gorillaz song “Feel Good” came on. I struggled up the first hill and kept having to pee for unknown reasons. I stopped 4 times to pee before the 2nd aid station!! When I got to the aid just before Hike 3 I heard some familiar voices shouting my name. My mom and Patty were waiting there for me. Patty gave me some Salt Sticks which I swear saved my life, and my mom gave me a solid dose of encouragement. After I crested Hike 3 I felt like I had a second wind, my bladder was subdued and I just kept dreaming of that finish line. I even caught up to a few of the guys that passed me earlier in the lap.

(Of course) my Garmin watch died before the end of the race; I was running “blind.” I didn’t know when my final descent would come to bring both pain and glory. My playlist shuffled to Citizen Cope and the words “Sun’s gonna rise in a mile, in a mile you’ll be feelin’ fine…” and I just KNEW I was approaching the Teaberry Rock Trail–a steep and merciless rocky descent to the pool parking lot that promised BBQ and the end of a hard day.

It was true. Just as the song ended, I saw the trail sign that I had so longed to see, yet even more so, longed to put behind me. I actually paused to grasp the trail sign with both hands and mutter something like “This is it!” I might have added some foul language, but my memory is hazy.

I took the trail cautiously, still wanting to keep all of my teeth intact, as mentioned. About half way down, I took the ear bud out, hoping to hear the sounds of cheers for those runners finishing in the valley below, hoping to hear the sound of my mom and Patty’s voices. Not even a minute later, that dream came true. Mom and Patty were on the hillside, cheering for me, and I started to tear up with the emotion of it all. It was really happening – I was finishing! Then my tired lungs ached as I laughed at their bushwhacking to beat me to the finish line. Patty ran the last stretch with me through the parking lot, and although I felt every bone and joint in my body, I found some speed to finish the effort and crossed under the banner at 6 hours, 9 minutes. Well under my goal time, well beyond my expectations.

A huge thank you to the Race Director, Mike Dolin, and the WVMTR for putting on a great event, and particular thanks to the volunteers at the aid stations that gave me shots of Coke so I could survive lap 2. Thanks to the other racers who made the wilderness less lonely and who challenged me to keep the pace. Very special thanks to Patty and my mom for their encouragement and keeping my spirits high. and for my husband’s final text to me before the race:

“…It’s time to climb into the belly of the beast. And you know there is only one way out. When in doubt, look for glory!”

It seems 2015’s first lesson was to squash the fear of the unknown with bold action. As I sit with a branded, wooden finisher’s medal beside me, I can’t help but wonder what other adventure this new year will bring. For glory!