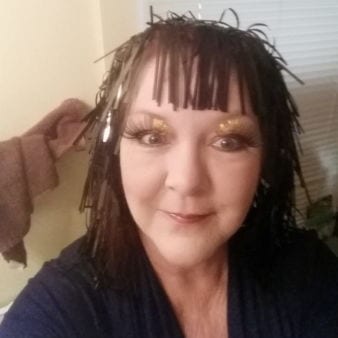 My CTEPH story started the summer of 2018. I worked for a restaurant chain that had made big promises to me and didn’t keep a single one. I got rehired at the local school district so I quit the restaurant job. I had big plans for my summer off: camping, gardening, traveling, and cleaning areas of my house that needed it. Then, I got sick.

I began throwing up almost daily and had constant diarrhea. Nothing would stay down for very long. I was losing weight rapidly. Because I would not have health insurance again until September I was going to our local community clinic. They kept misdiagnosing me, and I kept getting sicker. I lost more than 40 pounds. I had no energy and noticed an increased shortness of breath. I shrugged that off to weakness because I wasn’t getting any nutrition. I got so depleted that I ended up in our local hospital for three days.

I was discharged with no diagnosis except that I had been near death with my kidneys shutting down and severely dehydrated. Once my insurance kicked in, I got a new primary care doctor and saw a specialist in gastroenterology. I had biopsies and a colonoscopy performed. I was diagnosed with lymphocytic colitis. I was treated with medicine for it, and slowly my ability to eat crept back to almost normal. However, my shortness of breath increased and I found that I couldn’t even walk from my car to the school I worked at without having to stop several times to catch my breath.

I still shrugged all of that off to being weakened from months of not being able to eat. Then, about a week before Thanksgiving 2018 I woke up in the middle of the night with throbbing pain in my lower right side. I don’t have an appendix or a gallbladder so I assumed my lymphocytic colitis was back. But, I started vomiting and the pain grew very severe, so at 5 A.M. my husband took me to the emergency room… again. They did a rush CAT scan on me and found a blood clot in my right kidney.

The rest is kind of a blur. Lots of tests. Pain medications that looped me out. Seeing the worry in my husband’s eyes and telling him to call my grown children in Washington state and my mother in Florida. I KNEW something was very wrong. My local cardiologist did a right heart catheterization and said he found a hole in the right backside of my heart. He then sent me by ambulance to Kansas City- KU Med hospital. That’s when I got scared. KU Med hospital was two and a half hours away.

I remember praying and asking God for mercy. Thankfully KU Med is an accredited PH hospital. They have pulmonologists who specialize in pulmonary hypertension. I didn’t know that then. My husband is a self employed mechanic. He hurriedly made plans to close his shop down and have our animals taken care of. Our sister-in-law drove him the two and a half hours to the hospital. I went through a series of tests: VQ scan, echocardiogram, CAT scan, numerous blood tests, and tests that I don’t remember.

I think the fourth day we were there the chief pulmonologist came in with his head nurse and began explaining that I had CTEPH – clots in my lungs and lots of them. No cure and right heart failure. My world just dropped out from under me. I began crying- a gut-wrenching sob. A messy ugly cry. He explained to me that they were going to put me on Adempas, the only medication for pulmonary hypertension, and a blood thinner, Eliquis, which he said I would be on for life. My PH was in the high 90s which is not good.

Except for the blood clot in my right kidney I’d never been diagnosed with deep vein thrombosis or any kind of blood clot. The doctor also spoke with us about PTE surgery and going to San Diego or Temple University Hospital in Philadelphia for it. I didn’t even know what PTE meant. We were discharged the day before Thanksgiving. Even though I was now on Adempas and Eliquis I still had severe shortness of breath. I could barely do my job. My primary doctor cut my hours down to 25 per week with no lifting more than 10 pounds and no stairs.

The school district covered the difference from the sick pool then catastrophic leave. By early January I was back at KU Med where they kept me for four days. They got a lot of fluid off my heart and adjusted my medications. Then my pulmonologist referred my case to Temple University hospital for PTE surgery. There was a lot of waiting and then more interminable waiting. Lots of anxiety. Finally Temple called and a date was set. We scrambled getting everything in order. We had to get flights, lodging, money for Lyft rides, money to cover our bills, and final arrangements made for me in case I didn’t make it home.

My husband had to close his shop down again. For weeks. Our family, friends, church, and places of work all gave us prayers, time, and financial assistance. We flew to Philadelphia and my mother flew in from Florida. My brother drove over from Pittsburgh, Pennsylvania as well. Hosts for Hospitals helped us with housing while we were there. After two days of their testing Dr. Auger gave me the devastating news that I was not a candidate for PTE surgery. Most of my clots were too distal. I once again had the ugly cry. I thought, “Well this is it. I’m going to die.”

But, after lengthy discussions we let Dr. Bashir perform two BPAs. He actually got approximately 20 blood clots out during my two extensive BPAs. They assumed they were “fresh” as they weren’t calcified. We were there a few weeks. I did have some complications; after the first BPA my incision wouldn’t stop bleeding for hours. Then I had an allergic reaction to the dye they used during the procedures. I became very itchy.

We came home and after three or four weeks. I returned to work. Still under the same restrictions. The BPAs did help my breathing. I can’t do a lot of stairs but I can do some. Financially my pay was cut to less than half of what I was making due to working less hours and no longer receiving sick pool or catastrophic leave. We got rid of cable/internet months ago. We do what we can to cut corners. But, it’s hard. And I do not yet know what the outcome is. I have yet to have a follow up done at KU MED hospital. I know that I will need more BPAs. I don’t yet know if I will be able to continue working. My boss is an exceptional person and has advocated for me from day one. We are extremely thankful for my continued health insurance, for Team PHenomenal Hope, and my online CTEPH support group. Every bit of help is so appreciated and nothing is taken for granted.

Colleen is a recipient of the Unmet Needs Fund. Learn more at teamph.org/unmetneeds.