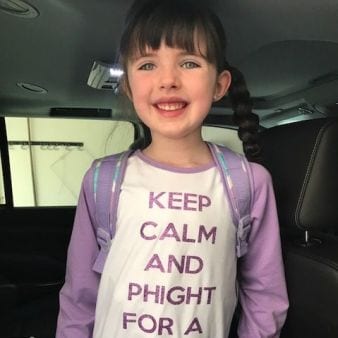 For most of her life, we thought Riley was just a normal and healthy child. She would have the run of the mill viruses that seemed to hit her a little harder than most kids and a couple of hospitalizations, but we didn’t think anything of it. She ran and played just like any other child would.

At 15 months old, the doctor heard a heart murmur when she had a fever at one of her doctor visits. We were referred to a Pediatric Cardiologist who told us her Pulmonary Valve was thicker than it should be, but she would grow out of it. We went on with life and had follow up appointments every six months.

During one of her follow up appointments when she was three years old, she just wouldn’t let them do anything, so we were told that if we see any shortness of breath to call. Over the summer of 2014, she spent a lot of time in the pool as usual. This time I noticed her getting short of breath or gasping for air when she would swim. We didn’t really think a lot of it because she was a very dramatic little girl! She never had any other issues.

In the Fall of 2014, Riley started experiencing shortness of breath when she would run, which was very unlike her, so I made an appointment with the cardiologist since it was almost the end of the year. Little did we know, that was the appointment that would change our lives. The doctor didn’t come back quickly like usual and I heard her on the phone with Cincinnati Children’s Hospital and mentioning Riley. My heart immediately sank. It was a week before Christmas and we were due to go to Cincinnati Children’s on Dec 21st with our new diagnosis of Idiopathic Pulmonary Arterial Hypertension.

We had no idea what it was, and we were terrified. Riley had her first heart catheterization and started on two medications. A few months later they discovered that she was getting worse and started subcutaneous Remodulin. It was so hard because Riley could no longer take a normal bath or swim without a special suit. She had to be careful and quit doing a lot of the activities she loved.

She had a lot of pain with it and was pretty much terrified to when it came time to change the site. A year later she started on IV Remodulin through a permanent IV line in her chest. This medication has greatly improved her heart and lungs! It comes with its worries, such as IV line infections or getting pulled out but we will take it if it helps her.

Riley has been an amazing PHighter throughout all of it. She doesn’t let it get her down, and always has a smile on her face. She has dreams of starting a non-profit to help kids like her with PH get dry suits so they can swim, and also send care packages to kids who are in the hospital. She is nothing short of amazing!

We are so excited to be a part of Team PHenomenal Hope’s #LetMeBeYourLungs program and partner with Melissa Callas to help spread awareness of PH and hope for a cure!