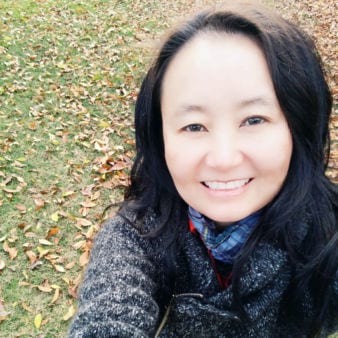 My name is Brenda Vang. I am the oldest of seven. My father was a teacher in a Thailand camp and served during the Vietnam War as an English interpreter (since he was able to read and write). We came to the United States in 1979. I remember as a kid, the doctor told my parents something about my heart. However, in our culture western medicine was something that we were not familiar with. As a kid I never noticed anything wrong with me physically. In high school during physical education I was always out of breath before others, but I never thought anything of it.

Years went by and as I was talking to a coworker he informed me that he noticed my coughing. I didn’t think anything of it because I was feeling fine. Thinking about it now, I would cough, but not enough to be noticed. I later learned that was probably the first sign. Years later when I wasn’t feeling well, I went to the emergency room and after a few tests, the doctor told me I had six months to live. I don’t even think I was listening to anything else except the words six months to live. Questions ran through my head like, “How this can be?”

I was referred to a pulmonary hypertension specialist within a week and he diagnosed me with PAH. I remember hearing facts, but as a new patient all the information went in one ear and out the other. It turns out my condition is genetic. My mom had a hole in her heart, which I inherited. When the heart wasn’t closed as a kid, it led to PAH. He started me on tracleer and right away I noticed a difference. I was doing very well.

Next, my doctor wanted to do a bubble test to see how big the hole in the heart was. Everything was fine until I sat up. I felt funny and the nurse had me lay back down. Next thing I knew I couldn’t feel my left side. I couldn’t move or talk. It was the scariest thing I had ever experienced. It turned out that the bubble test left some bubbles that went to my brain and caused a stroke.

My first catheterization was done at Valley Children’s Hospital. My doctor had a friend that worked there who specialized in closing holes in a patient’s hearts. He performed the catheterization, but he ended up not closing the holes. I was informed that it was not a good idea to close the holes since my heart was acclimated to that pressure. My doctor then referred me to Stanford. They had a team who educated me on what PAH was.

By then I was teaching already. There was an incident at school years later where the ambulance had to be called for me. I felt ashamed of my condition after that. Not wanting students to ever see something happen to me inside the classroom, I decided it was time for early retirement.

Feeling like I was in this struggle alone, I joined a local support group. My support group leader Perry and I met with Congressman Jim Costa to co-sponsor the bill H.R. 3520, The PH Research and Diagnosis Act. This was my first time meeting a congressman, and I gave a little speech on my experience. I remember being nervous about it. It was completely new to me, but a good experience overall.

Late last year, I started my own business called BB Joyful Creations. I taught workshops local for Bible Journaling and modern calligraphy. I also used to volunteer and teach Sunday school at the Bridge Church.

This year has taken a toll on me due to the COVID-19 pandemic. I’m not able to run my workshops, and not seeing friends has been hard. I’m nervous every time I go out. After getting groceries and running errands, I wipe my hands and spray alcohol often. When I get home, I put all my clothes in the wash, wash my hands and then take a shower.

On a positive note, having someone who loves me and faith has really helped me during my journey. Asking questions and not trying to please my doctors, but letting them know how I feel has worked for me.