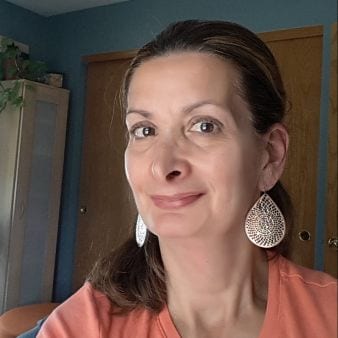 When I was contacted by Team PHenomenal Hope to be a part of the #LetMeBeYourLungs program, I was so excited! With my diagnosis came the inability to run. I always wanted people to carry my name with them as they ran. I would get weird looks when I asked. At the last CVS Health Stride for A Cure run, there was a runner who approached me afterward. I asked him if he would carry my name with him for the next Stride for a Cure run, and he agreed. I was happy that he agreed.

Team PH matches athletes with Pulmonary Hypertension patients to raise awareness and funding through their campaign #LetMeBeYourLungs program. They match an athlete and patient in fairly close proximity. I couldn’t wait to find out who my athlete was.

Several days later, my match came through. This was like match.com, but only better! His name is Anthony Piatek and he has been running marathons since 2010. His mother was diagnosed with PH in 2010, and sadly passed away in 2013. Anthony has committed himself to the awareness of PH and fundraising. Anthony and I connected via email and later, Facebook. I followed his training that he posted. He was set to run in the Grand Rapids Marathon on October 15th.

He was my hero.

We don’t live that close to each other so it was hard to get together for a face to face, but we made that happen a week before his race. We met at a restaurant and as soon as he entered he recognized me. We had dinner and opened up about our struggles with PH. Anthony as a son and caregiver, and me as a patient. He is passionate about this cause and he has a lifelong commitment to this mission. I gave him a Superman hoodie because to me, he was my hero. I asked him to carry my name with him so that I was with him on race day.

Unfortunately, the race that Anthony was running was 3 hours away from me, and I couldn’t get there for it. I really wanted to be race-side and hold up signs and shout as he ran by. I imagined being at the finish line when he came in cheering him all the way.

I got to be part of the race! I was running with Anthony!

He shared with me an app that keeps track of runners during a race. I immediately downloaded it and started to follow him, complete with alerts. Race day I got up early and checked Facebook. Anthony posted a picture of him wearing the Superman hoodie and another with my name down the back of his leg in marker. I was overjoyed! I got to be part of the race! I was running with Anthony! He was running with me and for me and for his mother and for all of us with this disease!

The app I downloaded shows the course and where the runner is at that you are tracking. You also can send pre-recorded messages to cheer them on. I think I overdid it. At every mile, I got an alert with where he was, his time per mile and his ETA based on his current pace. He was crushing it! It was the next best thing to being there minus the cold and rain.

Thank you, Team PHenomenal Hope for the opportunity and especially to Anthony for being my partner! 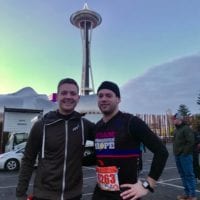