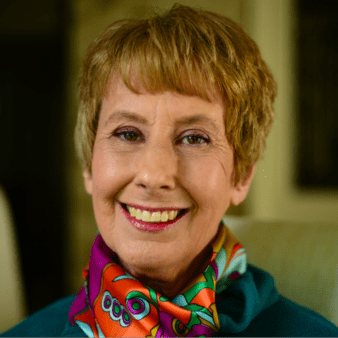 This was my first memory I have that I was different from other children. My journey with pulmonary arterial hypertension stemmed from specific events relating to snow. In the mid-twentieth century, my family lived in a small suburb of Pittsburgh. Freezing winter temperatures and school-closing snow storms were common facts of winter life. Sledding down our steep backyard, building snow castles and accompanying snowmen were wonderful avenues for children to expend all their excess energy. At least this was my mother’s mantra! She would bundle my older sister and me in an unimaginable number of clothing items, layered to ward off the elements. Long Johns, tights, two sweaters, wool coats, two pairs of mittens, and socks, with scarves wrapped around our necks and heads in such a manner that we were nearly unrecognizable.

Then she would triumphantly shove us out the front door, announcing that she would call us for lunch. Much to her dismay, within 15-20 minutes, she would hear frantic banging on the door. Upon opening it, she would find me alone, sobbing and sputtering the words seen above. Reluctantly, she would bring me inside and peel off the layers, exposing blue and white fingers. This was the first realization to my family that I was extremely cold-sensitive. At the time, no one knew I had Raynaud’s phenomenon, which would plague me the rest of my life.

When my family moved to southern California, my purple and white hands were still an unwanted part of life. California, the land of year round air conditioning, became home until my husband and I relocated to Portland, Oregon.

Systemic scleroderma, a term I had never heard became part of my life during my pregnancy with my daughter. Soon after her birth, I discovered that Raynaud’s, with its unrelenting reflux, difficulty swallowing food, and a few other annoying manifestations were all facets of this disease. This led me to a Portland scleroderma support group. This was an eye-opening experience since I hadn’t realized that this disease could progress to one’s organs, particularly the lungs (PAH) and kidneys.

From 1998 to 2003, we experienced a wonderful opportunity to live in Bavaria! With frequent four-day weekends and generous vacation days, we were able to take advantage of many travel opportunities and enjoyed exploring much of Europe. During one of those excursions, I became extremely ill and eventually was flown back to Portland for three months. Upon returning to Germany, I found myself unable to walk short distances and my shortness of breath took over my life. With no diagnosis from the German medical community (other than to say I was lazy and out of shape), we relocated back to Portland where I was finally correctly diagnosed with pulmonary arterial hypertension, secondary to scleroderma.

Since then, my medical providers have been very attentive, and in spite of several severe set-backs, the progression of my disease has been very slow. The treatment advancements and on-going research in the field are helping me and many others live fulfilling lives, albeit at a much slower pace than most.

Judy is a recipient of the Team PHenomenal Hope Unmet Needs Patient Impact Fund. Learn more about how this fund supports PH patients at teamph.org/unmetneeds.