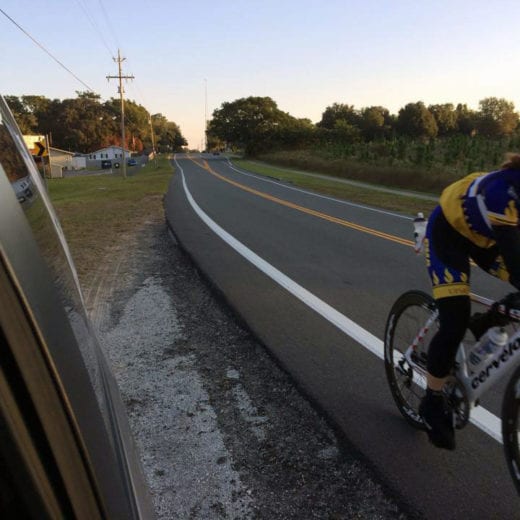 Friday Team Meeting on the Beach

This past weekend my crew and I seized a unique opportunity to “paint Florida periwinkle” in the RAAM Challenge Florida. It was a race across the state and back, on the first day of pulmonary hypertension awareness month, so it seemed like a perfect race to cap off the season. It was a special weekend on many levels, from racing to meeting up with old and new friends, and is probably best described through the playlist my friend Misana deejayed on our drive down to Florida and some from the car.

Well I never seem to do it like anybody else, maybe someday someday I’m gonna settle down. If you ever want to find me I can still be found taking the long way… – The Long Way Around, Dixie Chicks

Aero position riding toward the Gulf into the headwinds

Just a little road trip. On Thursday morning I awoke at 3AM and packed the car with all the items set aside the previous days: two bikes, spare wheels, box of crew gear, lights, more lights, batteries, more batteries, Primal kits, Generation UCAN, more UCAN, and importantly 2 Nespresso lattes. Next stop: pick up Misana, and we were Florida-bound, on our way to a new adventure.

Taking the long way… From the 16-hour car ride to Daytona to the cross-Florida bike race, it was on-the-go, steady not frantic. I think that’s part of the appeal to my team and me – this idea of a trip, and adventure, of taking a deliberate course to get from start to a finish.

Oh I need you by me beside me to guide me… So let’s dance the last dance tonight – Last Dance, Donna Summer

It begins. After spending Friday preparing the vehicle, bikes, and our team for the race, race day came early. We woke up at 3:30 on Saturday morning, time enough to get some food, coffee, and head to the starting line. Race start at 5AM. For all of us this was the last big effort of 2014. And wow, were we ready to get going and see what would unfold that day.

So happy to meet Valerie on Friday afternoon!

Hey brother, there’s an endless road to rediscover… If the sky comes falling down, for you there’s nothing in this world I wouldn’t do. – Hey Brother, Avicii

Crew. When you do ultra-endurance racing, you realize that the most important part of all the prep is having a great crew. And as I’ve written about previously, this definitely translates to life. When it’s dark and cold outside, or you’re sore or suffering, or when you don’t know where you’re headed, it’s all about who you have in your crew van. For this race we had my father, Tom George, as the intrepid driver. My mom, as chief navigator, and Misana came in as the ultimate utility player, driving, navigating, and bringing her technical skills to keep us connected – both with each other through the Cardo BK-1 system (microphones and earpieces), and with the outside world.

We saw Kathleen at the top of Sugarloaf!

Outside our crew van, we felt the support of new and old friends. On the day before the race we met Valerie, Support Group Leader from Daytona Beach, definitely a highlight of the weekend!  So great to meet a warm and inspiring member of the PH community. On race day Peter called me (through the BK-1 you can actually talk on the phone while riding your bike) while I climbed Sugarloaf Mountain. “Hey Georgie, how’s it going?” to which I said, “I’m actually climbing the mountain in Florida right now!” and we chatted bit as he was headed to New York for the NYC Marathon and I was headed to the crest. What a pick-me-up!

Then at the top of Sugarloaf Mountain (the highest peak in Florida) we met up with Kathleen Richardson on the side of the road! That put a few more watts of power in my pedals and a huge smile on my face. And in the middle of the night, when it was dark and quite cold, my mom read me some posts from friends, family and my teamie Ryo back home (actually the irony was she was in San Diego, the start of RAAM, on November 1), and, well, even though we were the only car for miles in the middle of Florida, we realized we were definitely not alone. We knew who we were riding with, both near and from afar.

Family. Friends. Community. Thank you!  And for you, there’s nothing in the world I wouldn’t do…

We beat the sun to the Gulf of Mexico

Into the headwinds. With communications between the car and bike using the Cardo BK-1, my mom caught me humming this tune that we had heard driving across the Georgia Florida state line, and while I may have felt a modicum of swagger on the inside, I didn’t ride with my hands up. Quite the opposite because honestly during the day it was a battle against the wind. My goal was to get to the Gulf coast (186 miles) by sunset if not sooner. This was not easy with a steady 22 mph headwind and gusts above that. I stayed low, stayed “aero” (meaning flat back and low on the bike to break the least wind), and we just kept going.

Focus. There was little talk going out during the day because honestly we were focused on turns, traffic, and on the race. And in those hours I honestly felt that blissful state of focus on a race that lasted longer than a day. It’s hard to describe, but when you can put the rest of your life and the world outside the bike out of your mind and just focus on your speed, power, and the road, adjusting to the pains that come with 24+ hours of repetitive stress on your body and adapting, it is truly being in the present moment. And living in that, well, is happiness.

The Night. The most challenging moments of the race were definitely the winds and then the night. It was cold. It was dark. And it had been a long time since I had done an all-nighter at all, and never on the bike. In the middle of the night the eyes/mind begin to play tricks on you. I don’t think I had hallucinations per se, but experienced things like seeing two lights side-by-side in the oncoming lane perplexed about two motorcycles traveling so closely parallel, then seeing that it is one car when it passes. Or seeing blurry traffic signs and thinking “I wonder why they make them blurry here” until you get close enough they become clear. Or seeing what you swear is a giant pelican sculpture, only to notice as you pass that it is a tree and a light pole (that was not a beak) on the other side of the road. Yeah strange things happen in the middle of the night.

You might be surprised to also hear you can actually fall asleep pedaling, as I felt myself get groggy from time-to-time. My mom and I talked to each other through the BK-1, and well, sang to keep me alert. Turns out she knows the words to a lot of college fight songs. Meanwhile I couldn’t even string together the words from my own alma mater (usually a slam dunk). I was tired. We were all tired. Yet we kept going. At one point when I felt the fatigue and the soreness in my neck, feet, and, um, seat, I thought to myself to relish it. I actively embraced it in my mind and became even thankful for it. I told my mom it was a blessing to be able to ride my bike like this, to push the limit, have a crew, have the opportunity to race. To race with the community. To race for Team PHenomenal Hope. Everything about this race, this entire journey in fact, has been special.

The finish. The last 11 miles northward up the coast hit us with headwinds again, so it slowed the finish from that which I had projected, but we still kept going. And as we rode from Smyrna Beach to Daytona Beach, we saw the sunrise over the Atlantic, and sea birds fly in flocks overhead. Sunday traffic picked up too, and all sleepiness fled. It was now about finishing.

The feeling of battling the winds, the fatigue, the cold, the winds again, and then crossing the finish line was a mixture of exhaustion and exhilaration. Mostly the latter. When I crossed the finish line and saw RAAM officials Fred, Rick, Dan and Jim, and then my crew outside the van, it was joy. Hugs all around. The race had taken 27 hours 10 minutes, and we finished. The RAAM Challenge took its toll that day on all racers. Although fourteen started, five did not finish. We ended up coming in first in the women’s race and fifth overall, setting a new course record for the women’s standard bike on that course. Most of all we were happy to finish and finish safely. That’s just how you feel after an ultra race. Thankful.

We headed back to the hotel to warm up (my teeth were chattering from hypothermia) and pack up. With a patient scheduled in clinic just about 27 hours away, Misana and I said our goodbyes to my folks and hit the road. Well she hit the road as I crashed in the passenger seat, feet in compression socks elevated on the dash waking up occasionally to tune back into our audiobook (Gone Girl – you should read it), relive a random moment with a “wasn’t that cool!” or mumble other random things. I asked which was more tiring, working a long MICU shift or crewing for a 24-hour race. Her answer: The race.

Many thanks to Team PHenomenal Hope Sponsors UPMC, Bayer, Actelion and others who also raced with us on the first day of Pulmonary Hypertension Awareness Month.

Coach Jim Bruskewitz – For encouraging me about 2 months ago to go for it and getting me ready to go for the 400-mile mark. He is a tremendous coach.

Fiks:Reflective – For again keeping us visible overnight and safe

Generation UCAN – For fuel to keep going in this ultra event

Ink Division – For printing up our sweet purple t-shirts!

Finally thank you to the RAAM Organizers for one fun 2014.

At the finish, with purple crew shirts glowing in the sun!

Looking ahead… This race was great closure to an unbelievable season. But to be honest, I am even more excited about the future of Team PH. You see, this may have been the last big race in 2014, but it isn’t the last race for Team PHenomenal Hope.

What if knowing the race for a cure for PH isn’t over, our job as a team is not yet done…