PHighting IPAH One Day at a Time: Heather Dean 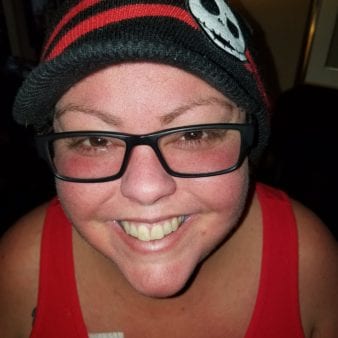 My name is Heather Dean and I am 33 years old. In December 2015, I was in a car accident that would change my life. I was driving, and passed out behind the wheel. Luckily I hit no other cars, but went into an empty lot and hit a pole. I was taken to the hospital, treated, and sent home the same day. Later that evening I again passed out and went back to the hospital.

There I stayed for a few days to ensure there was no major injuries from the accident. I had been feeling light headed and dizzy at times and had noticed I was getting tired faster and unable to do all the things I normally would. I happened to be out of town at the time and was told that I would have to get clearance from my doctor to return to driving.

Upon returning home, I saw my doctor who did an EKG and an echocardiogram. The echo showed some issues, so I was sent to see a cardiologist. The cardiologist said the echo showed elevated levels in pulmonary pressure and I needed to see a pulmonologist. From there I began seeing a pulmonologist, and he performed a right heart catheterization along with multiple other tests. I was diagnosed with IPAH in June of 2016.

I was then started on Opsumit along with other medications. Some didn’t work, and some I was allergic to. After nine months, and not much change, I was sent to a pulmonary specialist in Dallas, Texas.
I was told that I was very sick and would need to be on an IV infusion pump medication. I went home and awaited the approvals needed for the pump, and on May 30, 2017 I had my IV line put in and started Veletri. Veletri was very hard on my body and I was in bed for close to 10 weeks.

I slowly started going back to work and tried to find a new way of living. I had awful side effects from the medication. By October of 2017 I found myself in bed unable to function. I went to the hospital in Dallas where I was switched from Veletri to Remodulin. I have continued with this medication.

Though I still have severe side effects, they are not nearly as bad as Veletri was.
I continue to fight every day to find a new normal for me. My partner, Melissa, is my biggest supporter. She is there for me every step of the way. She reads and researches to try and find ways to help me fight.

My favorite quote: “Life isn’t about waiting for the storm to pass but learning to dance in the rain.”