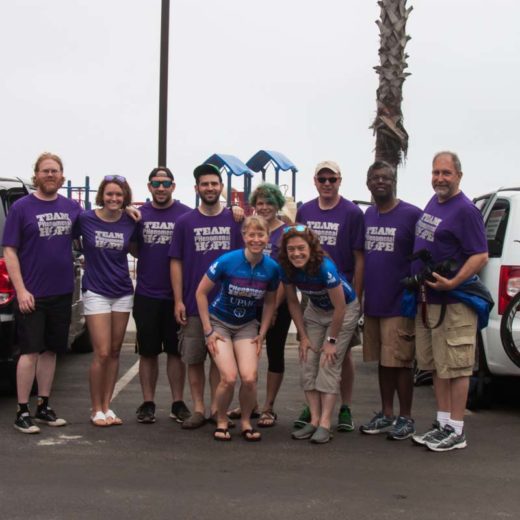 2012-2014: Team PHenomenal Hope and the Race of Our Lives: Racing Across America with the Pulmonary Hypertension Community

The journey began in 2012, when friends tossed around the idea to race in the Race Across America (RAAM), the most challenging bike race in the world.

“What if we … ”
The idea of Team PHenomenal Hope was inspired, in part, by the 2010 Mount Kilimanjaro climb, and feeling the impact of what happens when people devote their passions and do something epic to lift up the pulmonary hypertension (PH) community. Team PHenomenal Hope was formed to be a beacon for the PH community, using endurance sports to raise both awareness of Pulmonary Hypertension and funds to help find a cure. Partnering with the Pulmonary Hypertension Association (PHA), University of Pittsburgh Medical Center (UPMC), and numerous other sponsors, our effort expanded beyond a small group of bike racers into a grassroots movement across the country.

It’s not just about the bike. It’s not even about the race. It’s much bigger than that.

From the start, our team was grounded in the cause and those for whom we raced. Attending the 2012 PHA International Conference with teammates and participating in support groups from Pittsburgh to California and even Hawaii, Stacie Truszkowski, Anne-Marie Alderson, Ryanne Palermo and I, Dr Patty George, were embraced by the PH community.

As we were preparing for the race of our lives, people living with PH were in their own race, as well. PHA launched a campaign called Race of Our Lives, in which patients joined with us in Unity Miles events, setting their own goals and creating their own events to raise awareness about PH. PH patients inspired us to wake up and ride at 5 AM, to commute by bike to work in the cold weather, or do whatever it took to fulfill our promise.

“Congratulations, you have just registered for the Race Across America, the most challenging bike race in the world.”
Training accelerated into a 6-month preparation for race day. From December through May we added longer weekend rides and interval training and cross-training during the week. Our crew chief Kate Bennett, and crew member Peter Kochupura, planned the details – from crew recruitment and vehicle logistics to training the crew for the race ahead.

While it is the racers who would be in the spotlight, the truth was that the crew would be the ones that got our team across the country by driving and navigating, providing nutrition, fixing flats and other mechanical duties, and – most importantly – improvising. Think NASCAR and MacGuyver, but moving at 18 miles per hour day-and-night across the entire United States in about one week.

From the United States … riding for the Pulmonary Hypertension Association, Team PHenomenal Hope!

The race began beachside in Oceanside, California. With all the prep work done, our strategy set and pre-race TV interviews behind us, it was time to race. All our preparation came down to the race that was about to begin. I remember feeling the enthusiasm of members of the PH community, hearing cowbells at the starting line, wondering how we would fare in the 100+ degree desert heat, or in the windy plains of Kansas, knowing that in RAAM, anything that can happen will happen.

Our team and especially the crew worked the hardest I’ve ever seen people work, day and night. Together.

Racing RAAM is one thing, but the sleep deprivation, the 24/7 race and constant movement of it, living in the narrow confines of a moving RV, the fact that there are lives on the road in the headlights of the support vehicles with a radio connection between the car and cyclist – well, high-pressure is an understatement.

Yet our team thrived in this environment, truly working together despite the toll of cumulative sleep deprivation. In just over one week we: climbed Mt. Palomar; descended the Glass Elevator 3000 feet into the dry sauna-like heat of Borrego Springs; powered up the Yarnell Grade in Arizona; learned that sunrise starts with hint of a blue glow on the Eastern horizon around 4:30AM; saw rock formations in the Utah desert glow pink in the rising sun; flew on a tailwind through Monument Valley, 35 mph on the flat; climbed the Rockies into Durango and continued up Wolf Creek Pass, with a late night descent through crosswinds and tunnels; kept the bike rubber-side-down through treacherous crosswinds of La Veta Pass; survived 100-degree humid heat in Kansas, overcame RV mechanical failures including loss of air conditioning; were revitalized by a spontaneous patient pep rally in Bloomington, Indiana; rode through a treacherous thunderstorm in West Virginia; climbed the steep Appalachians; rode through the palpable tranquility of Gettysburg National Park; and finally, crossed the finish line in Annapolis.

There on the dock we celebrated our finish with family, friends, and PHriends both near and far through a live Skype broadcast to the PHA Conference in Indianapolis.

The most important strategy in ultra-endurance racing, especially team racing, is to keep moving, keep going, and whatever you do, don’t stop.

Not only did we feel the satisfaction of completing the Race Across America, but truly knew that this was the effort of a team much bigger than our cycling team from Pittsburgh. It was that driving force of racing with the PH community that I will never forget. It is this vital energy that we will build upon as Team PHenomenal Hope grows into the future.

Each new year brings new endurance athletes to the team. These people will push their limits in races all over the map, while dedicating their training and racing to people who work to breathe and live with PH. We know this team will continue to energize the endurance community and the PH community, and we invite you to follow us as we continue the race to help those who live with PH.