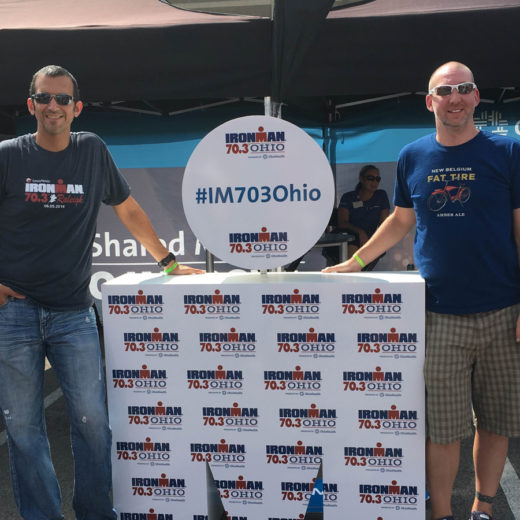 This was my second Half Ironman distance race this year. I unforunately fell ill prior to the Half Ironman earlier in June, so I was seeking some readmission on this one.

We knew coming to this one that it’s going to be flat and fast race, but since this was the first year for the race, we were not sure what to be prepared for – anything from bad roads, choppy swim, heat, etc. Overall, Ironman and the race organizers did a good job, considering that no one knew what to expect.

This particular race was a “point-to-point” race, which meant that we had two transition areas. The first transition area was swim to bike (i.e. T1). Then, we rode our bikes to the second transition area (i.e. T2), which at the Ohio Wesleyan University (Delaware, OH). Here, we switched from biking to running. Having this type of transition meant that we needed to prepare a lot of logistics the day before the race, and the morning of the race too.

Luckily, I was blessed with a wonderful supporting cast led by one of the most patient and understanding woman I have ever met – my wife! I was even more fortunate to have my PHenomenal Hope and Fuel Your Passion teammates/friends/journey mates, Dustin Wehler and DJ DuBois racing along side of me. They gave me all the motivation I needed. We also had the privilege to race with another Team PH teammate, Nick Hamilton.

The start of this race felt pretty unique to me. I took note that weren’t any professional triathletes at the starting line. And also, I had just joined new age group! It was a bit chaotic in the morning – having to drive to T2, ride the bus to T1, set the bike and then walk to the starting line. There were too many people and a lack of great organization, but eventually, we made it to the starting line. At that point, there was only a few minutes before the start of the race to warm up. But fortunately, it was enough time to get some of the morning butterflies out of the way. I was part of the first wave, which was both exciting and terrifying. But, one of the best parts about starting in the first wave is that you stand for the National Anthem, just like the pros!

And then the race was off! The swim wasn’t too bad – the course was one big loop. The buoys were on the left, which was of great benefit to me since I breathe to my left. It was a bit dark outside when we started, but the sun started to come up while we were in the water. I was swimming with a couple of guys in my heat. It wasn’t too long before we were lapped by the faster groups, though. I had no complaints about the water conditions, until we made the final turn to come home. The currents began hitting us sideways which drifted me away from the pack. That cost me a couple of minutes. Still, I recorded a new PR for this distance.

We were able to ride the bike course the day before the race, so we had an idea of what to expect as far as the road conditions, water stops, terrain, etc. The course was FLAT! However, the roads were not in great shape. The organizers did their best to clean them up, but there were some areas I was sure I was going to have flat! Fortunately, any and all flat tires were avoided on my end!

I had a plan to stay within certain wattage (power), but my power meter failed to work. So, I moved on to plan B which was by heart rate. I stayed in the big ring (up front), and I felt good throughout the ride. There were a couple of climbs towards the end, but it was a welcoming sight to get us off the seat and loosen up those back muscles.

The transition to the run was a bit faster and much cooler since we used the Ohio Wesleyan University football field to setup the bike racks. The finish line was also setup at the end of the field, so we got to run on the track while the spectators sat in the stands cheering.

I LOVED the run course! It consisted of a mile to a two-loop, shaded neighborhood with rolling hills. Everyone in the neighborhood was out, cheering, and very excited about racers being there.

All and all, I had a great day. Almost everything went according to the plan. I was proud of myself for recording a new PR in all three legs of this race, which resulted in an overall new PR for this distance.

2016 has been a tough year for me as far training and racing due to unexpected work commitment and illness. But every time things get difficult, I remember all the PH patients I have met this year and what some of them have to endure just to get up a flight of steps! So, I thank you all for inspiring me to get up and keep moving forward, regardless of the challenges in front of me.

Also, I can’t tell you how thankful I am for all the help and support I received from my team (#‎TeamPHenomenalHope‬) and my family. They say that a triathlon is an individual sport, but it takes a village to get us through the finish line. Thank you again!