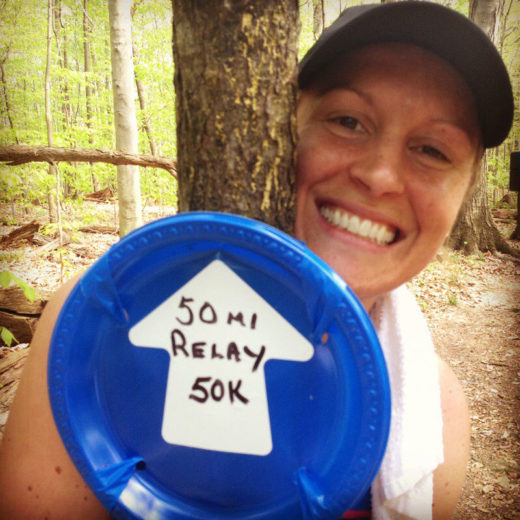 Be honest with yourself. If this is your first [re-donk-ulous event], you are unlikely to be in the running for an overall win or the course record. Sure, it’s possible, but only if you cheat and hitch a ride on a unicorn. And we both know you’re not a cheater and that unicorns are lazy.

If you have NEVER (never ever!) completed this race distance in your training… or even completed your race distance over the course of an entire week of training (assuming you do something silly like actually train…), the probability of some rookie-of-the-year record-setting effort dramatically decreases. Face it – your goal is to FINISH – and kudos to that!! That.is.good.enough. I repeat, that.is.good.enough.

2. Make a mental list of your motivators, and check it thrice.

Make no bones about it, you will hit some lows. At some point (maybe many points), you may feel that your body has quantum-leaped from a beautiful, lush wooded trail with tiny birds chirping an enchanting song of pending victory to.. the 7th Circle of Hell. A Hell so hot and suffocating and miserable that Dante himself would have vomited on his magenta-colored Brooks and swan-dived into the stagnant puddle filled with giardia and tadpoles and other creepy-crawlies for a bit of relief. During those less-than-blissful moments, it would serve you to remember a few things:

Probably because you had some grandiose vision of yourself crossing the finish line of the longest race you’d ever attempted, everyone cheering and high-fivin’ you then tossing you a beer or a Big Daddy pizza with extra peps. You were your own hero in that mental Instagram and (some version) of that future is still possible! Positive imagery can puff that chest right back out! Or, at the very least, tempt you into some forward progress.

(b) Who are the people who encouraged you to get to the starting line?
Kill them. Just kidding. Well, if you do die in your attempt, you should come back as a ghost and haunt them for a little while. It’s really only fair.

No, no, no. Those are the sweet, sweet faces that should interrupt your visions of ice baths and Aleve and giant tubs full of Ben and Jerry’s Chocolate Therapy. Don’t haunt them unless absolutely necessary.

If those friends/relatives/coaches are on the course, and you reach one of those low moments, just keep running until you can see them again and get that hug, slap on the ass or shot of Coke that will get you through to the next Aid. And, if you’re in the middle of God-knows-where and all alone, don’t be afraid to imagine those supporters running alongside you, giving you the old “You got this!” In fact, keep that mantra going, because “You got this!” Plus, if you don’t “got this..” you are still in the middle of God-knows-where, my friend… so keep moving!

At the end of the day, you have to be alive at the finish line. This is one of life’s unavoidable realities. So, (duh) try not to kill yourself. If the temperature reaches some astronomical suffer-fest-inducing level and you’re feeling like you’re going to lose your breakfast – again – slow down. Walk. Crawl. The name of the game isn’t “go as fast as you can until you’re lying in the fetal position in a patch of poison ivy…” rather, it’s about assessing the situation with any inkling of mental faculty you have remaining and adapting for – SURVIVAL. Maybe it means slowing down to a walk or bear-crawling up a hill or sitting on a fallen tree staring at a dead leaf and daring it to move faster than you. You’re the judge and the jury when it comes to what is acceptable. Be kind to yourself. Live.

When the aid station guy offers to dump cold water all over you like you’re a pre-Deflate-Gate Bill Belichick in a sleeveless hoodie on Super Bowl Sunday.. you let him do it. And then tell him you love him as you prace away. He is the reason you are able to prance. And we both know you’re cooler, have more integrity and can rock a sleeveless hoodie better than Bill B.

5. Trust no one, but keep your hands to yourself.

When someone tells you the last hill is coming up, never believe that crap. Your idea of what constitutes as a hill has dramatically changed in the past X hours. If you can’t walk a slinky down it, it’s a climb.

In the same vein, try to resist the urge to punch someone in the face when they tell you ” you’re almost done!” even if you’re at least an hour out from smelling the finish line BBQ.

Understand this – you will hurt. And even though everyone else appears to know what they are doing and/or make it look easy-ish, you’re all citizens of Suffer Town. Make friends out there. Smile and encourage others; they will do the same. You all have the same dream today – to cross that finish line, jump in a freezing cold lake, and swear off running for the rest of your life. Or, at least until the pain wears off.

Get used to that waddle and associated grunting noises. After you finish, and you will finish, you may find some routine activities to be a little more difficult. Ascending and descending stairs is particularly… impossible. Feel free to slide down stairs on your butt, and be more open to accepting piggy-back rides, if necessary. It may take several days to regain a normal gait, or one that doesn’t resemble… something stupid looking. But, be proud!! You earned that waddle as much as you earned that plastic medal which you should confidently display around your neck for at least the next week. Congratulations, you were victorious!