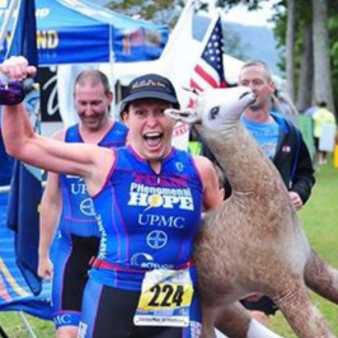 Here’s a recap of a beast of a race known as Savageman!

Although it’s only 70 miles, it’s earned the reputation of being one of the most difficult triathlons in the country, mainly due to the bike course.

Around mile 18, you enter the town of Westernport, MD. This is the entry of the 7 mile climb over Savage Mountain. It welcomes you like a punch in the teeth, with a 4 block span known as the infamous Westernport Wall.

The first 3 blocks are steep, but at least they have a surface that allows for the ability to gain traction. Then there’s the oh-so-challenging 4th block… It’s like a drug that draws endorphin junkies from all over the country!

The 33% grade isn’t the worst of it; it’s the deteriorating cobblestone surface that’ll kick you in the behind!

The incline, together with the fact that it appears to be patched by a bunch of toddlers using Play Doh, has it deemed as impassable to vehicular traffic.

If you make it to the top of all 4 blocks without putting your feet on the ground, or crashing, (and complete the race within the 9 hour time limit) you’re rewarded with a very unique trophy; a brick with your name engraved on it. The bricks become a part of the road at the upper-most part of the 4th block. It’s a HUGE honor to have your name become a permanent fixture in the Westernport Wall!!

I’ve had numerous unsuccessful past attempts at completing this challenge, including Savageman 2015, a test run 2 weeks prior to the race, and another one 2 days prior.

There was a part of me that thought it wasn’t worth the embarrassment to even try again on race day, since I had never made it on any of the trial runs.

There’s an alternate “bypass” option for those who have no interest in trying to get a brick. I was very close to being one of them.

As I was preparing for the race that morning, I put on my Team PH kit. It made me feel like Superman putting on his cape, as well as reminding me of the patients I’m racing for. They have no “bypass” option.

If it were only based on courage and determination, any of the PH patients would likely qualify for a brick! The choice was obvious- I had to try.

The Cervelo bike I would be riding was very special! “George” was named after his previous owner, none other than Patty George! This alone was a true mental boost!

Grandma is gonna get a brick today

As we raced into the town of Westernport, I was praying, and began talking to George as if he was human. Talking became more like shouting… “This is our day to get a brick!!! WE GOT THIS!!!!” Spectators lined both sides of the street with cowbells, cheers, and horns as we entered the “brick zone”!!!

While I still had some breath left in me (near the bottom), I yelled, “Grandma is gonna get a brick today,” and they starting cheering for grandma! It was awesome!

I got to that 4th block, and Faris Kindilchie, another PH Team member, was positioned on the wall as a volunteer. He was one of several who were ready to try to catch any cyclists who would potentially fall! He was in my face screaming, and truly helped me to tackle that wall!!

I expended every last ounce of energy within me to get to the top… And I DID!!! I unclipped, and cried as I hugged Faris, along with everyone else who was within arm’s reach!  It was quite an emotional moment!!!!

The next challenge was to finish the race within 9 hours!

After injuring my knee several months ago, there were very few training miles of running in my recent history. Since I’m already a slow runner, this meant that the half marathon was going to be a struggle.

The terrain is tough, and includes even more hills. I had a little over 2 and 1/2 hours to complete it and not forfeit my brick that I was SOOOOO excited about!

There were several friends who stayed by my side and were extremely encouraging. They refused to let me stop, and literally pulled me thru those last several miles! One of them was Dustin Wehler, another Team PH member, who not only completed the 70 mile race that day, but did the 50 mile option the day before. (He’s a BEAST!!)

He could’ve easily been saying “let me be your legs” as he helped me shuffle through those final steps of the race!

The professional photographer captured the moment when I saw the clock and realized I was within the nine hour limit (with only a few minutes to spare), and would be eligible for the long anticipated brick trophy! The fact that it also included me carrying the Pittsburgh Tri Club‘s team mascot, an alpaca, was an added bonus! 🙂

I truly felt the positive impact that a team can have …

My experience at Savageman has uncovered so many emotions- from overwhelming fear to joyful excitement and everything in between! Triathlon may not be a team sport, but on September 18th, I truly felt the positive impact that a team can have on an individual as they’re struggling through a difficult time.

It was a HUGE learning experience on how to better understand our role as a support team for our PH patients. I’m quite honored to be a part of that team! 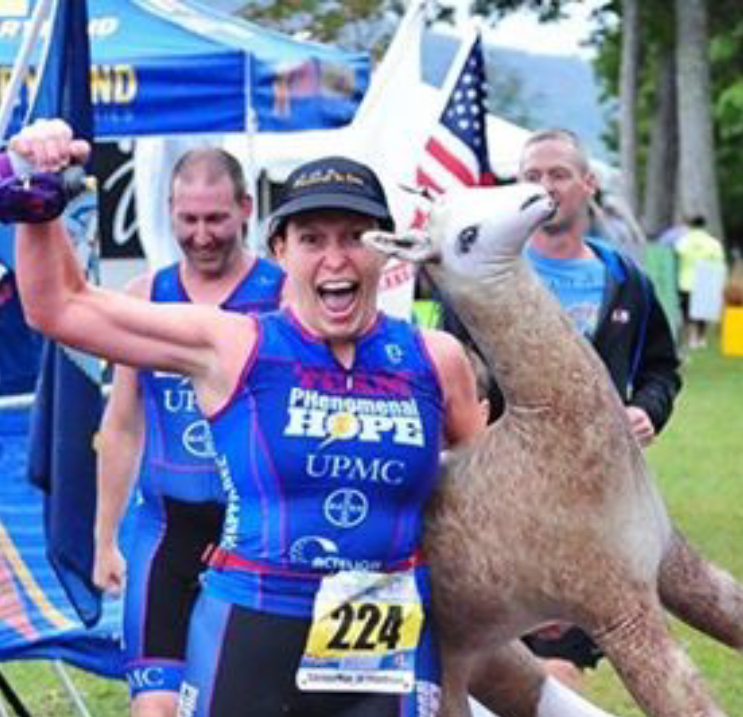