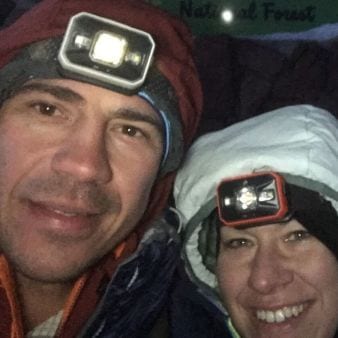 “You can’t understand someone until you’ve walked a mile in their shoes.”

For Team PHenomenal Hope athletes Jessica Lazar and James Ashbaucher, climbing 14,410 feet above sea level not only brings them to the top of Mt. Rainier, it also gives them a clear perspective on what it’s like to live with pulmonary hypertension.

At such high elevations, altitude sickness sets in and climbers start to feel some of the same symptoms PH patients experience, including shortness of breath.

“It’s amazing what PH patients have to endure,” Jessica said after trekking up and down Pike’s Peak a few weeks ago in preparation for the Mt. Rainier climb. “We got better as we came back down – we could breathe again, think straight again. We experienced what the patients go through, but ours was just temporary.”

Reaching the summit of the contiguous U.S’s most glaciated peak, though, involves enduring more than just altitude sickness. The average success rate for conquering Mt. Rainier is 50%. Erratic weather leads the reasons why climbers often turn around without staking a flag at the top.

While they can’t predict climate conditions, Jessica and James trained for more than a year for the things they can control, like strength and stamina. Both live in Pittsburgh and took to ascending (and oftentimes running) up more than 30 flights of stairs at the Cathedral of Learning while wearing their heavy packs.

“Mountain climbing is not just about how fast you can run,” said James, who is one of seven firefighters on the Mt. Rainier team. “You’ve also got 35-50 pounds on your back. Climbing the mountain is not the first time you want to put those things on.”

Jessica, James and his fellow firefighters will be joined by several guides and one more climber to make up three groups of four. Throughout the journey, team members will be tethered to one another. They spent all day Monday training on what to do if someone slips and starts to fall down one of the hundreds of crevices along the trail.

On Tuesday, they officially set out to tackle Mt. Rainier, camping at 10,000 feet. They’ll leave at midnight for the summit and attempt to arrive at dawn. On Wednesday, they’ll head back down.

For both Jessica and James, this climb represents more than conquering a mountain. It’s about taking the steps to spread pulmonary hypertension awareness and reach the ultimate peak – a cure for the disease.

“It’s truly an honor to be able to represent these incredible people, walk a little way in their shoes and be their lungs,” Jessica said. “They face it every day with bravery and integrity. All we’re doing is climbing a mountain and coming back down.”