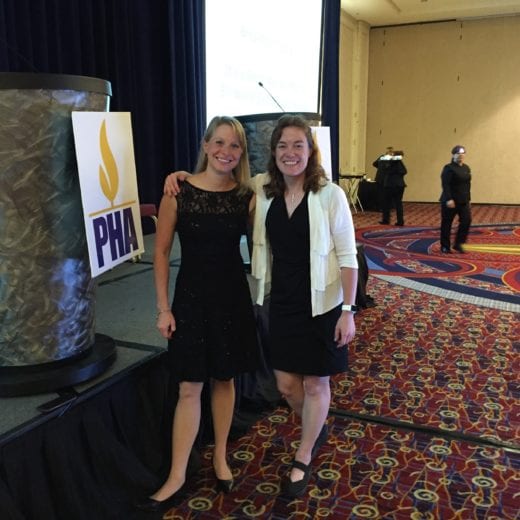 In September 2015, Team PHenomenal Hope athletes Anne-Marie Alderson and Patricia George spoke at the PHA PHPN Symposium. They shared stories from the road about living your dream, and started a conversation with the community. The next series of posts we share thoughts from ultra-racing and the lessons they learned from their experiences that go beyond ultra endurance sports.

How does an idea like racing your bike across the United States even begin? I suppose the process of choosing to live a dream is different for everyone. Also, the seeds that inspire you to live your dream may not reflect the final dream. It sometimes comes from the summation of small, unrelated moments in life that somehow add up to paint a completely new picture. Sometimes people think of these moments as being at the “right place at the right time,” “answering a calling,” and perhaps this sensation that one experiences speaks to the idea of being on one’s true path.

Team PH began with these small moments. On one level it began with 4 women who loved to ride their bikes, all amateur racers, but who were passionate about the sport. We each had our separate paths that led us to ride bikes together. And in each of our journeys we had people who influenced us in pushing harder, experiences that made us think bigger.

For me, some of those early, small moments included riding and racing local races in Pittsburgh. And then attending a February bicycle camp in Tucson, Arizona, riding with all these cool people from the USA and Canada who were endurance athletes. They talked about Race Across Oregon, and riding back-to-back double centuries, and they planted this seed of endurance racing and ultra-cycling. Separate, small moments.

For Anne Marie, endurance sport began with running no further than a 10K, which became a marathon, then a triathlon, then some bike racing, then an Ironman triathlon… etc. Each event a separate, small moment.

For all of us, individually, we had these separate experiences. Through our shared passion for cycling, we were brought together with our teammates (including Stacie and Ryanne, but also our awesome crew) in the local bicycling community. Just a handful of separate, small moments.

So what brought them together into Team PHenomenal Hope? That came from the PH community itself in June 2010 in Anaheim, California.

At the 2010 PHA International Conference in Anaheim, I was a young transplant doc and PH physician from UPMC, experiencing the power and inspiration of people doing extraordinary things. I’m sure many members of this audience remember the evening presentations about this amazing climb up Mt. Kilimanjaro by 3 of our own: Ray Benza, Bob Frantz, and Jessica Lazar.

These three teamed up to climb Mt. Kilimanjaro in the Path to a Cure in February, spending 7 days on the mountain and summiting the tallest mountain in Africa. I had been a bit of a groupie, following them in February online as they made their climb the February prior to conference, and in that conference they shared their stories of the challenges, from training to climbing at altitude, overcoming numerous obstacles, and how that connected them with the community they serve everyday. They inspired members of the audience, and definitely inspired me to think of taking on an epic challenge, of living one’s dream.

It inspired me, and by 2011, my teammate Stacie Truszkowski and I started to really kick around this idea of racing in the Race Across America. RAAM is a 3,000-mile bicycle race from coast-to-coast, one of the most challenging in the world.

We had talked around it in a casual woudn’t-that-be-cool sense, but now the inner voice was getting a louder, and the plan more clearly formed. We started wondering who would join us in this race. We were fortunate enough to be able to recruite Ryanne Palermo and Anne-Marie. I’ll never forget that moment when we asked Anne-Marie, “Hey would you want to race in the Race Across America as a 4-woman team?”

She immediately said “no”. But then she called the next day to say yes. It’s that inner voice that started to get louder, and that opportunity to choose to live our dream from which we could not turn away.

So we had our team of 4, with the dream of taking on our Kilimanjaro. We would need more help, more people, and more inspiration, but the course was set.

In February 2012, I met with Rino at PHA Headquarters and shared with him and his staff this dream, and how we wanted to take on this race with PHA. He fully supported this idea, this dream. At that point, we were humming, in this cause greater than ourselves. Soon after we received help from incredibly supportive local businesses and donors on the local scale, and on the national scale from UPMC, Bayer, and Actelion.

We were ready to take on this challenge, the Race Across America, to Live Our Dream, as a formal team.

For us, the Race Across America, Race Across the West, and most of all, Team PHenomenal Hope is about living our dream. It’s about listening to that quiet, sometimes random voice from inside calling us to do something epic, to stretch our boundaries. It’s about separate, small moments coming together into something larger than ourselves.

For many of us, I believe there are times where we say, “I must do this.” That speaks to our inner nature, to who we truly are, to our authentic selves. Finding a way to actually do those “must do’s” puts us further along the path to living our dream – and ultimately our life’s purpose. So for us it became “I must race my bike across the country.”

We decided to do RAAM. Together. All of us. And we did. We we able to live our dream.

What is your dream?