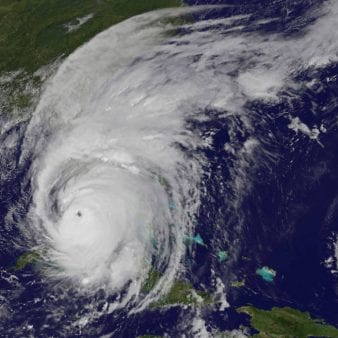 On September 20, 2017, our island was hit by Hurricane Maria. Puerto Rico was declared a disaster area. Thousands of people and communities were affected by the ravages of this hurricane. Rivers overflowed, resulting in floods and landslides throughout the island, which caused terror, anguish, and devastation. Fallen trees obstructed the most important roads, and several bridges were totally cut off. Strong winds and their gusts of up to 200 miles per hour caused great damage. We feared we would lose our home.

Communications also were affected, which made it very difficult to contact our relatives. We were limited in basic supplies, such as food and drinking water. The electrical system was destroyed in its entirety, leaving the island in total darkness. Wood houses also were destroyed.

Hurricane Maria caused damages Puerto Ricans hadn’t seen in the last 80 years. The despair among the people was absolute. As of today, we have recovered what we were before the destruction. In the face of such darkness, we never lost hope to go on and to restore our island.

When I was most desperate, Evelyn Crespo called to inform me Team PHenomenal Hope was providing financial aid for patients with pulmonary hypertension (PH). We were very pleased to apply to this grant and be approved. Sometimes help means so much in a person’s life. Hurricane Maria was such a significant event that still marks our lives even today. Team PH showed me that they are committed to PH patients in Puerto Rico.

Once again, I reiterate my profound gratitude.