There is Life After Diagnosis: Alex Flipse 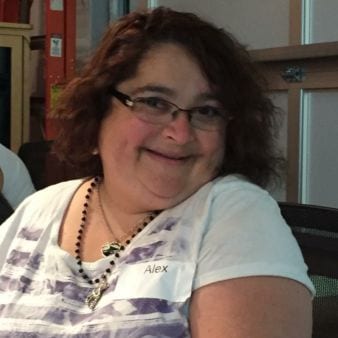 In 1996, I was a 25-year-old young, frazzled, scared, and overwhelmed mom. I have three daughters, who at the time were ages four, three, and a newborn. Postpartum depression set in immediately after the birth of my third daughter, like it had done with her two sisters before her, but it was different this time. The exhaustion level wasn’t like the previous two times, but it was all I could focus on. Was this depression?

In 1997, we were uprooted as a family when my girls’ father was released from active duty. We moved from Oceanside, California, to a very small and sleepy town in the middle of nowhere in Texas. My exhaustion got worse. I also was getting more and more shortness of breath. I thought it was because I was overweight, trying to settle in, and dealing with three small kids. Basically, I was a single parent, while their father looked for work.

I remember one day in early 1998, my sister had come to visit, and we had been chasing the girls around. I was tired and sat down. Next thing I knew, I was surrounded by paramedics who were taking my vitals. I asked what had happened and was told I had fainted. They suggested I go to the emergency room, but without any insurance, I refused and said I would go to our family doctor instead.

Each time I saw that doctor, I mentioned that I had passed out again and that I had been also struggling with really bad depression. Without running any tests or even listening to my heart or lungs, the doctor would just increase my Prozac dosage.

Another time, my other sister came to visit, and she saw me pass out. She called my ex-husband, who was working, and said he needed to go home right away and take me to the hospital. My sister also called the family doctor, and, thankfully, he wasn’t there. Instead, we saw the doctor on call who knew right away that what was going on with me wasn’t depression and sent me for a huge battery of tests, including an echocardiogram. In this small town of about 50,000 people, the on-call doctor had seen another person with pulmonary hypertension (PH) secondary to lupus. This is how I was diagnosed with PH.

I was immediately put on Flolan, an intravenously infused medication that was not only costly, but life-sustaining as well. In 1998, Flolan was the only FDA-approved treatment for PH. Remodulin was still in clinical trials and was known as UT15. My PH specialist didn’t want to take the chance that I might get the placebo.

Four or five years later, Tracleer was approved by the FDA, and I was immediately weaned off of Flolan and put on it. I was on Tracleer for nearly 11 years, until I participated in a study that did a right-heart catheterization with exercise. Later that same day, I had an MRI of the heart to see if they could get more information than they could with the right-heart catheterization. That is when they found that I had developed pulmonary arterial hypertension (PAH) due to left-side heart disease. I have been on Sildenafil for five years now.

Over the years since my diagnosis of PAH, I have developed several autoimmune diseases. I believe it is very important to realize that even though we have PH, it doesn’t mean we might not develop something else.

I have learned so many things in these past 20 years since developing PH. Always listen to your body, because as patients, we know what’s going on inside of us better than anyone else. Always seek treatment, counseling, or talk to confidant if you are feeling depressed or overwhelmed. Don’t let things go because you think you’ll feel better over the weekend. If you have a question, ask someone, call your doctor, or ask on a trusted social media site. Never stop moving, and most importantly, never give up hope!

Without hope, what do we have?