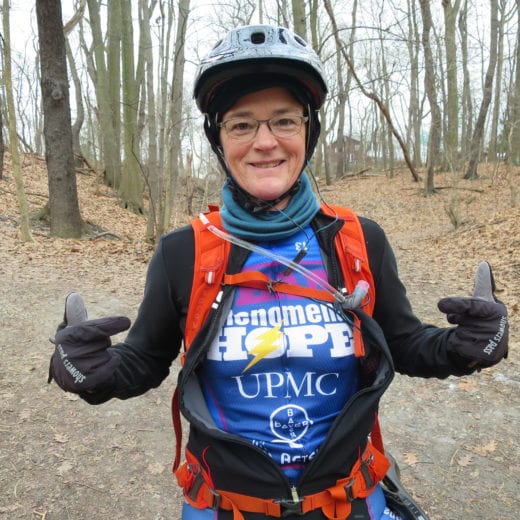 In just a couple weeks, as Pittsburgh fights its own endurance race against winter’s long nights and icy days, four cyclists will be heading to New Zealand to race bikes. It’s not all fun in the sun for these Pittsburgh women, though, as they will race the grueling Pioneer mountain bike stage race to represent Team PHenomenal Hope and bring further awareness and raise money to fight Pulmonary Hypertension. Not only will they be racing for patients in the United States, but for those afflicted with the condition in New Zealand.

Team PH split up their racers for this event into two sub-teams; in our last blog post we introduced Patty George and Harrison “Hap” Farber. Today we introduce the second pair, Kristen Engle and Thea Kent.

For both racers, just like Patty and Hap, this event will be a first in many ways. Thea has raced many times, and has done multi-stage road races, as well as long races on gravel, riding for four days going 8-130 miles each day. But never a challenging mountain bike course such as this.

Kristen, on the other hand, has never raced before and this will be an entirely new experience for her. Fortunately, she is a mountain biker and very confident in her handling skills, endurance, and mental stamina.

“If they put me on my childhood Schwinn today, and flew me to New Zealand, I’d make it,” Kristen jokes, but luckily she has a few more days of training ahead of her, as well as a quality mountain bike. She has been training hard for this event and is excited to be racing alongside more experienced teammates, adding, “As race day approaches, I am focusing on mental fortitude. I think of the patients often, and what they go through. I also think of the times in my life I have had to dig deep and find the courage to go on.”

The closest event she has to compare to this race is her ride through the Swiss Alps with a great friend, a ride that was a 50th birthday present to herself.

“At one point the trail was on a cliff’s edge and we had to carry our bikes for four hours to the summit. I’ll have that picture taped to my bike.”

Thea also has a physically and mentally exhausting event to compare to the Pioneer race, but not one she competed in herself.

“I will be comparing it to the Best Ranger Competion I went to see my brother do,” she says. “It is a 3-day event with very little sleep. It is done with one other person. It is grueling and all about what you can endure with someone else.  This aspect of it makes it very different than other team events where you trade off.”

When asked why they were doing this race, they both agreed with Patty that this event is the definition of epic.

“Who wouldn’t want to go halfway around the world to ride for seven days, up crazy hills and down technical descents, feeling the pain, all amidst profound natural beauty?” says Kristen.

“This is the stuff life, for me, is made of. A personal challenge for a greater good, in a world that’s lost its confidence, for patients who haven’t.”

Thea echoed the sentiments of riding for patients living with Pulmonary Hypertension, and the both personal and charitable gains of a charity race such as this. The four racers headed to New Zealand for the Pioneer race don’t all know each other as intimately as other past Team PH groups have when doing long endurance races such as Race Across America (RAAM) or Race Across the West (RAW). This dynamic will add it’s own challenges while also aiding in the natural camaraderie of team events.

“The fact  you have to race with someone you don’t now, or know very little, enables you to learn empathy during hard times for someone else’s struggle,” says Thea. “You have to work within these parameters during the race. In life you also have to learn to have empathy for those who struggle with disease, or pain, or hurt, you have no struggle of your own with.” Pulmonary Hypertension is something that afflicts hundreds of thousands of people worldwide, many of whom go undiagnosed. It is a disease that affects many aspects of life that those of us without the disease often take for granted, and Team PH is striving to bridge that gap of awareness and empathy.

“My goal is to learn more about the struggle people with PH have, to find ways to connect with people who have it and to start a thread of awareness in a place there was not one before,” adds Thea.

While both racers have endured great feats of physical fortitude, it may be their personal struggles that set their barometer for pain and forbearance. In 2011 and 2013, Kristen nearly lost her daughter and son, respectively. Her daughter nearly drowned, and Kristen, a trauma surgeon, performed CPR while begging her daughter to come back. In her line of work, she knew that while she couldn’t emotionally believe in the possibility of losing her daughter, that the actual possibility was quite real. But she did come back. She vomited the water she’d swallowed, and was okay. Her son was his by an SUV while riding his bike. He was eight-years-old and his small body was badly injured. Tenacity runs in the family, though, and he, too, survived.

“How can I compare these horrid near misses to The Pioneer? I cannot,” she admits. “I do know that I have, we all have, hidden strength saved for great purpose.  That knowledge gives me strength. Like a crumb in my back pocket, when I cannot stand hunger any longer, it is there for me to draw on.”

Kristen may need that crumb somewhere along the way in New Zealand, on a challenging climb or during intimidating pre-race chitchat. But if she doesn’t, in the spirit of teamwork, it will be there to share with her teammates.

If you wish to support Team Phenomenal Hope as they race the Pioneer in New Zealand, donate HERE. As Kristen says on her Facebook page, “if you ‘like’ me, donate!”