Racing my own Personal Race on Team PHenomenal Hope – Part One 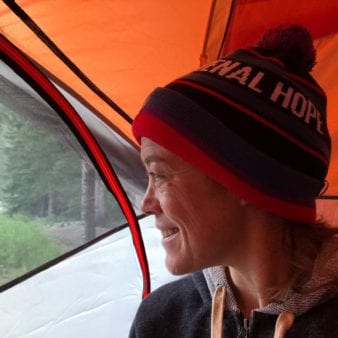 Going back to the starting line

My last major event with Team PHenomenal Hope was the Silver State 508 in 2017. I trained for it, raced 508 miles in the Nevada desert with an amazing crew of Peter, Joe and Greg, and with Jonathan and Ornah there cheering us on, finished that personal goal. It’s the race in which everyone takes the name of their spirit animal, so I raced as #gingercat, after my favorite feline, Presby. Read my Silver State 508 recap here.

After that, I decided it was time to seek out new challenges. I had raced ultra road races for a few years now, and wanted to more fully embrace the mountains of Colorado, so I chose mountain biking. I signed up for the Grand Junction Off Road 40 miler in May 2018, and the Tatanka 100 and then the Breck Epic, but 2018 would be humbling. Although I was used to centuries and more on the road bike, it turns out that 40 miles on a mountain bike is quite hard. So in 2018, at the Grand Junction race, which is the most technical course I’ve ever ridden, I didn’t make the time cutoff. Read my Grand Junction recap here.

Then at the Tatanka 100 in the Black Hills of South Dakota, in 100 degree heat and humidity, I suffered heat exhaustion, with a headache at the end of the first 40 mile lap. It was a race where you’re out there a LOT on your own, so I pulled out, for fear something worse would happen if I kept going on my own.

Finally, leading in to the Breck Epic last year, I just felt burned out on the bike, and also a little bit stretched at work, so I knew I wasn’t ready. Plus my teammate suffered an injury (more on that in a bit), so he was out too. I emailed the race organizer and asked if I could volunteer and camp out instead of race, and Mike said yes. That week was a week that turned around my mindset on the bike. I went from stressing over race performances to just enjoying camping in a tent and – with being course sweep one day and course puller another day – just being on or around my bike with cool people. Read my recap of this experience here.

At the end of the summer I did ride and finish the Grand Traverse, (barely) making the time cutoffs between Aspen and Crested Butte, and slaying a personal dragon. It felt good, but I also knew I had so much farther to go and so much work to do.

Over the winter I worked harder, and decided that 2019 would be the year of taking care of unfinished business. I trained hard for the Grand Junction race, and had a skills clinic before that, and also went out and pre-rode most of the technical stuff that tripped me up last year. And then on race day, rode and finished it, with about an hour and a half to spare at that first time cut off. Tatanka was looming on the calendar, but the race was canceled due to lack of funding, so that gave me time to get some more skills, and I took a skills clinic with Lee Likes Bikes, learned some mountain bike Kung fu and flow, which changed my whole perspective and helped me enjoy riding more and more.

In June my focus was elsewhere. We organized a major conference in pulmonary medicine, which on top of usual clinical duties led to a little insomnia, although a lot of excitement, but as I saw my training load go way down that month, I worried about the upcoming Breck Epic. Although this blog and my GoPro videos are a lot about riding and racing bikes, the truth is that as an academic doctor, my number one priority is my job, helping patients in the clinic, and building our program. So fitting in training will always be a challenge. I decided after the lung conference, however, that I would prioritize my own health and fitness again, at least get it in most days, so that I could better help others.

In July, I had planned to do the Triple Bypass with Irina and Greg. It’s an amazing road ride over three mountain passes from Evergreen to Avon. I had not ridden more than 40 miles on the road or mountain bike, and now we were going to ride 120 miles. I was definitely undertrained. I decided that depending on how I finished this I would know if I could take on the Breck Epic, about one month away. We finished the ride, and it was one of the most fun bike rides I’ve done. It was hard, as any ride with 120 miles and 10,000 feet of climbing would be, but I rode it with friends and together we finished and really enjoyed it. Check out my GroPro video recap here. Okay, I’m in. Moving toward the Breck Epic.

One significant change I made from 2018 to this year was incorporating more of these road rides and training (albeit a little late) to build my base fitness. I still love road riding, and Colorado has so many epic events, that it’s easy to go out and find your challenge every weekend. So, a couple of weeks later I raced the truly Colorado Mount Evans Hill Climb, and after that rode the Copper Triangle. With each ride I also tweaked my fueling (I sip UCan with Protein, eat Justin’s almond butter packets, Pure Vitamin Club Ultra Salt, and the occasional Honey Stinger chew or equivalent toward the end or hardest part of a ride). Every long ride I work to tweak the right amount and type of carbs, which is much less than most athletes as I train low carb and keto so I can be fat adapted and because I feel like it’s the best way for me to live for my own metabolic health. And I continued with skills riding and training indoors during the week. Things were on track. I was ready to give it my all in the Breck Epic, and my own personal Colorado Epic Series… 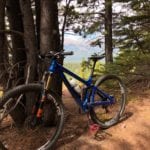 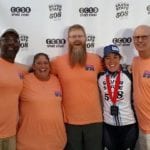 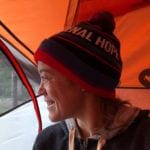 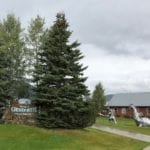